Supportive husband Prince Harry has made a surprise appearance alongside his wife, on what was supposed to be a solo engagement for the duchess.

In their first joint appearance since their ITV documentary aired, Harry accompanied Meghan to a roundtable discussion about gender equality.

Harry drove the pair to the event – held at Windsor Castle – in his electric Audi E-Tron. 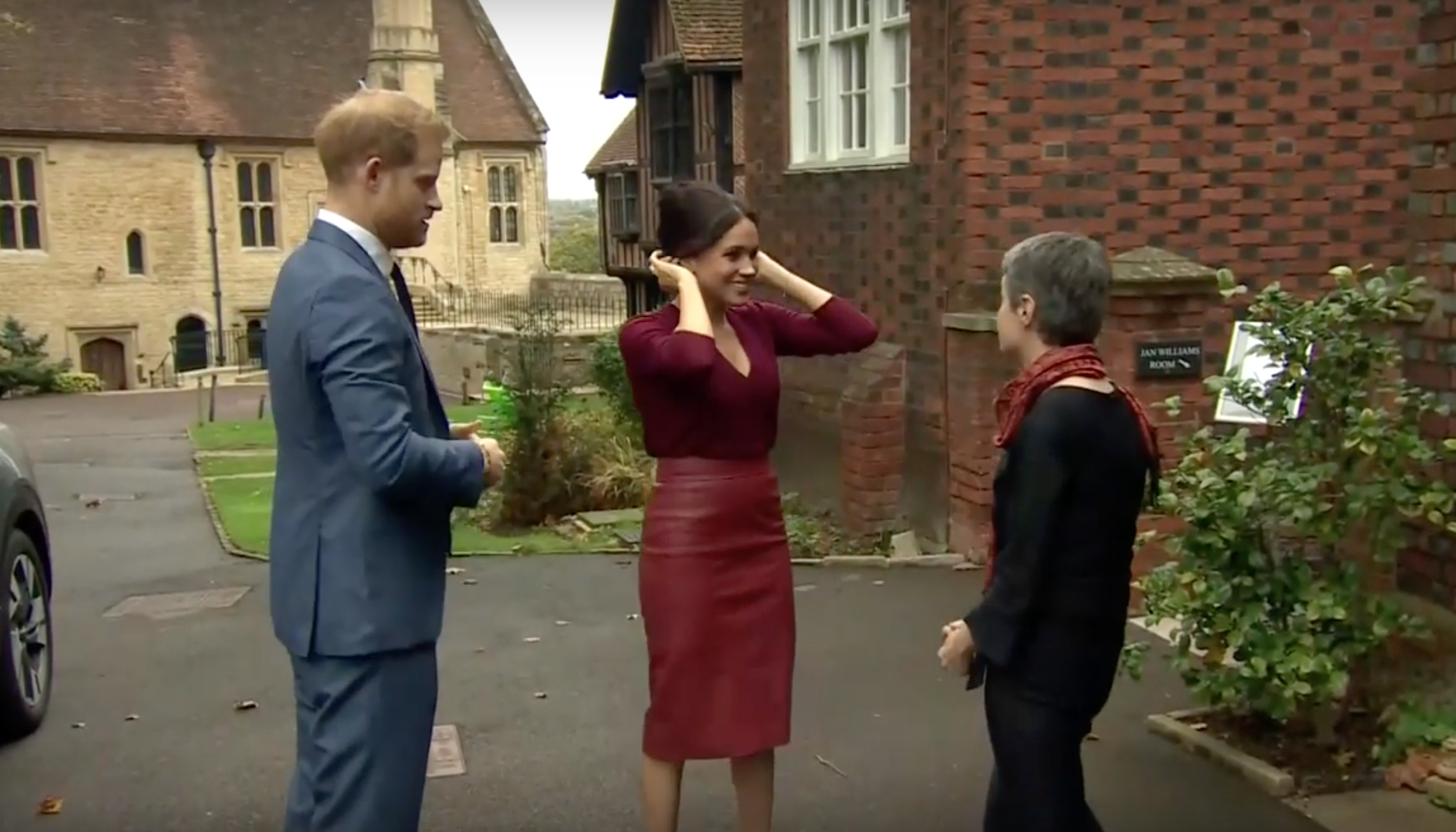 Meghan looked the picture of autumnal elegance as she arrived for the event with Harry (Credit: Youtube/TheRoyalFamilyChannel)

Meghan looked stunning in a wine-coloured leather skirt by Hugo Boss paired with a burgundy V-neck jumper and matching heels.

She wore her hair in a bouffant up do.

Read more: Catherine Tyldesley bans her husband Tom from dancing with her

Meghan was supposed to attend the event – led by One Young World representatives – on her own, as part of her role as Vice President of the Queen's Commonwealth Trust.

However, Harry decided to join her for the talk, which looked at how young leaders are driving meaningful change to empower women.

🌏Today at Windsor Castle: The Duke and Duchess of Sussex joined young leaders at a roundtable discussion on gender equality and inclusion. The Duke is President of The Queen’s Commonwealth Trust and The Duchess is Vice-President. Impactful young leaders from around the world including South Africa, Iraq and Malawi led a discussion on how to drive meaningful change and empower women. The roundtable was organised by @queens_commonwealth_trust and @oneyoungworld, both charities support and connect young leaders to bring about change. The Duchess of Sussex is a longstanding supporter of One Young World, having first joined as a Counsellor at the 2014 summit in Dublin. Earlier this week The Duchess of Sussex attended the 10th Annual One Young World Opening Ceremony at The Royal Albert Hall, which brought together 2,000 young leaders from 190 countries.

The duchess explained: "In terms of gender equality, which is something I have championed for a long time, I think that conversation can't happen without men being a part of it."

She added: "So for this reason it made complete sense to let him join today, so thank you for letting him crash the party."

It made complete sense to let him join today, so thank you for letting him crash the party.

Having attended the 10th Annual One Young World opening ceremony on Tuesday, The Duchess of Sussex was joined today by The Duke of Sussex for a round table discussion on gender equity with OYW and Queen’s Commonwealth Trust young leaders. Over the last few days, these young leaders became @OneYoungWorld ambassadors with the intention to return to their communities and further existing initiatives to help change the world for the better. This year OYW partnered with the @Queens_Commonwealth_Trust, of which The Duke and Duchess are President and Vice-President respectively, to provide scholarships to young leaders driving positive social impact in the Commonwealth. This was the most exciting collaboration between two groups The Duchess is passionate about and has been working with for some time. For more information and highlights from the week and how you can support these incredible leaders and their initiatives, visit @OneYoungWorld Photo © SussexRoyal / PA

"I guess we should have known because there were two empty chairs there, but I just assumed that an assistant was going to come along," he said.

The appearance comes after Meghan attended the One Young World opening ceremony earlier this week.