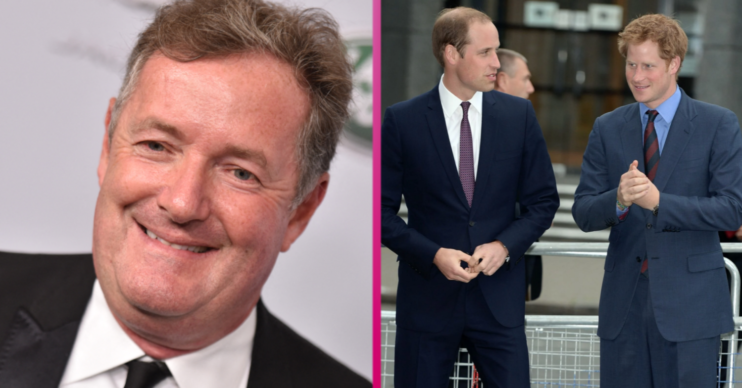 The presenter has told the brothers to 'sort it out'

Piers Morgan’s latest royal rant reveals that he thinks Prince William and Prince Harry should “bury the hatchet” and forgive each other for their mother.

In a new column, Piers Morgan writes that the two brothers should “sort it out” and find “peace and harmony” for what would have been Diana’s 60th birthday.

The brothers reunited on Thursday (July 1) for the unveiling of the statue of Princess Diana.

However, rumours suggest that a rift still remains between the pair.

Piers said: “I’m assured that the division between the brothers runs very deep and very furiously.

“How could it not – given how viciously Harry and his wife Meghan have publicly trashed the Royal Family on global television this year?”

Read more: William and Harry need to ‘remember their happiness’ as children to heal rift

His latest column for the Daily Mail pleaded for the two men to try and reconcile for their mother’s sake. However, Piers admitted he can understand why the princes have fallen out.

“If one of my brothers suddenly went rogue and appeared on TV with his wife to spray-gun the rest of the Morgans as a bunch of nasty uncaring racists, he wouldn’t be getting a Christmas card any time soon,” he wrote.

Piers Morgan to William and Harry: ‘Sort it out’

After the statue unveiling, William and Harry released a joint statement praising their mother’s “love, strength and character”.

They praised Princess Diana’s “qualities that made her a force for good around the world, changing countless lives for the better”.

Read more: William and marry were ‘relaxed and not uncomfortable’ at unveiling

However, Piers suggests that these good qualities in their mother should lead them to “sort out” their feud.

He added that their row would’ve “broken her heart”.

What did Piers Morgan say about Princess Diana?

Piers posted a tribute to Diana on July 1, which would have been her 60th birthday.

Despite his good intentions, not everyone was happy with his words.

On Instagram, Piers said Diana was “an extraordinarily complex person”. However, he also claimed her “demons” were “driven” by her need to be loved.

He added: “She became the biggest star in the world and revelled in her celebrity as much as she professed to hate it”.

Fans were divided over Piers’ post and many mentioned his treatment of Diana’s son Prince Harry and his wife Meghan Markle.

“Sure she would just love you when you publicly ridicule her son and his wife,” said one.

What do you think about Piers’ column? Leave us a comment on our Facebook page @EntertainmentDailyFix and let us know what you think of this story.