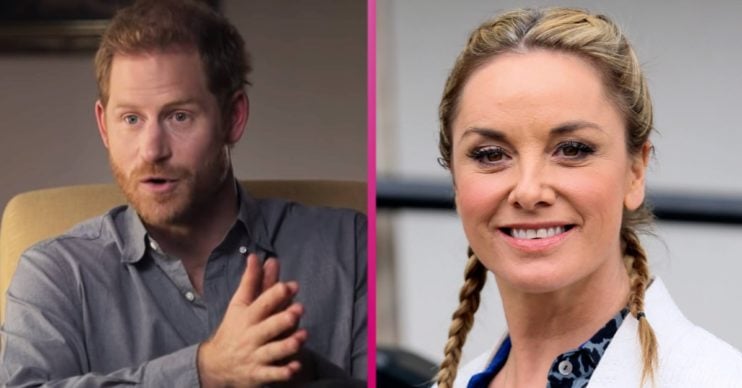 Has he been courageous, or "disrespectful"?

TV star Tamzin made the comment as she shared a clip of Harry reflecting on how “history was repeating itself”.

The Duke of Sussex made the incendiary claims in documentary The Me You Can’t See, which recently aired on Apple TV+.

She also indicated others shouldn’t be so quick to judge when they may not know the full circumstances.

Tamzin wrote alongside her retweet of a two-minute clip: “Nobody knows what they were going through except them.”

Adding clapping emojis to her post, the actress continued: “Brave man to stand up and change history for his chosen family.”

Many also commented positively about it, echoing what Tamzin had to say about Harry’s decisions.

Why shouldn’t he stand up for his own family?

But not everyone felt the same way – with one person even suggesting Harry was “undignified” for being so open.

What did Harry’s supporters have to say?

Plenty of well-wishers made it clear how impressed they were with Harry for prioritising the wellbeing of Meghan Markle and Archie.

“Good for him putting his wife and son first to give them a better life,” one person wrote.

Another reflected: “Why shouldn’t he stand up for his own family? Well done Harry.”

And a third supporter disputed any idea that Harry is “out for publicity”.

They wrote: “Good luck to him. He’s not choosing to [blank] on his family publicly. The public keep making it their business so he has to explain.”

Nobody knows what they were going through except them. Brave man to stand up and change history for his chosen family 👏👏 https://t.co/h3CFoP6RsO

Prince Harry latest news: ‘So disrespectful to his family’

Another person echoed Tamzin’s position. But they added they believed Harry had still gone about things the wrong way.

“Agree,” they began in response. “But he didn’t need to be so disrespectful to his own family in the process.”

Someone else pointed out they felt Harry’s timing was particularly off.

They explained: “His dad has just lost his father. His grandmother has lost her husband. Now is not the time for this. If he had any love or respect for them.”

And a third, very unsympathetic, user suggested Harry was “milking” the situation.

“But just do it behind closed doors!” they insisted.

“We all carry [blank] around with us. We just choose to have more dignity about it. #woeisme #princeharry #getoveryourself #selfobsessed.”