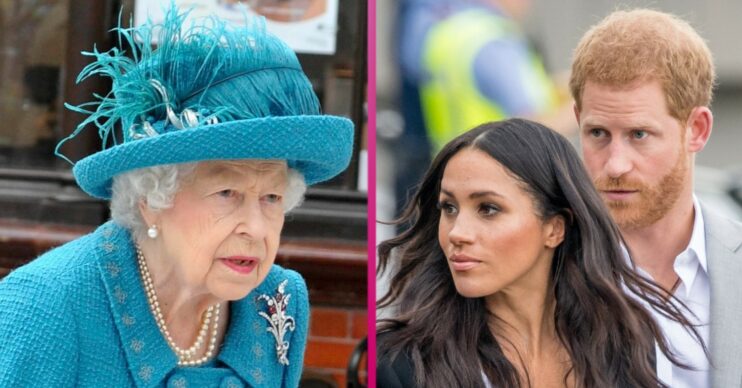 In the latest news concerning Prince Harry, the Queen has reportedly ‘had enough’ of ‘attacks from the Sussexes’.

The Sun claims orders have ‘come from the top’ for lawyers to prepare for potential legal action.

The tabloid also suggests publishers could receive a warning ahead of any publication of a tell-all book by Harry.

Palace aides are reportedly consulting libel experts about what can be said about the royal family.

The Sun reports the Queen has become “exasperated” with media claims about the Sussexes’ reported plans.

A source indicated the royals have ‘reached their limit’.

Furthermore, the tabloid suggests any book about Harry’s family could be considered as ‘breaching privacy’.

The insider claimed: “The feeling, coming right from the top, is that enough is enough.

The Queen and royal family can only be pushed so far.

“There is a limit to how much will be accepted and the Queen and royal family can only be pushed so far.

“They are getting lawyered up. Harry and Meghan will be made aware and know repeated attacks will not be tolerated.”

The report also claims any accusations made in Harry’s forthcoming book could be considered libel.

The insider suggests it would be “ironic” if Harry and Meghan‘s actions are then framed as breaching privacy.

Read more: Sarah Ferguson says the Queen is ‘more of a mother to her than her own’

It is also suggested the Queen’s legal team wants to have a look at the book ahead of publication and have the right to reply to any claims.

The source indicates there are ‘concerns’ the US public is “falling for” claims made by the couple.

ED! has approached a representative for Buckingham Palace for comment.

When will Harry see the Queen again?

Recent reports suggest Harry is planning to visit the UK later this year – and he could swing by to see his grandmother.

It is believed he will lead planning for next year’s military veterans’ Invictus Games in Holland.