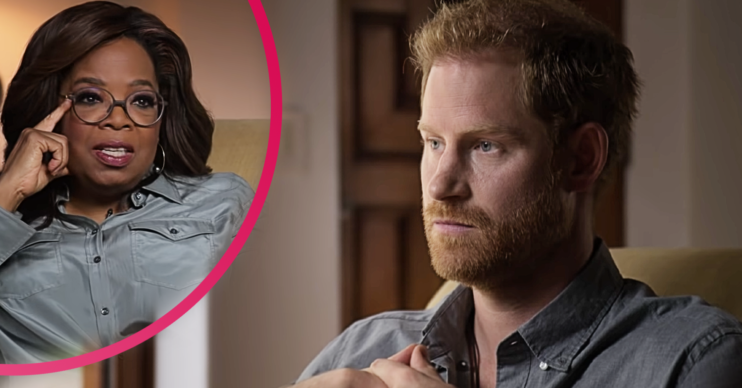 Hold on to your hats, here comes Harry again!

The Duke of Sussex, 36, takes part in the Apple TV+ series, The Me You Can’t See, which airs tomorrow (Friday May 21).

And insiders say Harry will once again share more comments that will grab the headlines.

What’s the latest news on Prince Harry and his new series?

Along with Oprah Winfrey, Harry is listed as an executive producer on the five-part series, which sees people from all around the world tell their own stories.

Apple says the show will “give us the opportunity to seek truth, understanding, and a newfound hope for the future.”

Furthermore, the Prince will open up about his struggles and discuss mental health issues with talkshow host Oprah.

A source told the Daily Mail newspaper: “One of the episodes is very personal… deeply.”

The source also said that he will drop some “truth bombs” during his discussions with Oprah.

What happened the last time Harry and Oprah appeared on TV together?

The last time Harry and Oprah got together for a chat on camera was in March.

During the now-infamous appearance, the Prince and his wife, Meghan Markle, caused a sensation when they made a number of accusations.

Meghan claimed there were ‘concerns’ and ‘conversations’ within the family over the colour of baby Archie’s skin.

She also accused Palace officials of lying, and said that Kate Middleton made her cry in the lead-up to her wedding to Harry.

Harry also opened up about the relationship he has with his father, Prince Charles.

What did Harry say on Dax Shepard’s podcast last week?

In it, he made more claims about the Royal family and especially his father.

Referring to Charles, he said: “I don’t think we should be pointing the finger or blaming anybody.

The Me You Can’t See streams from tomorrow (Friday May 21) on Apple TV+.