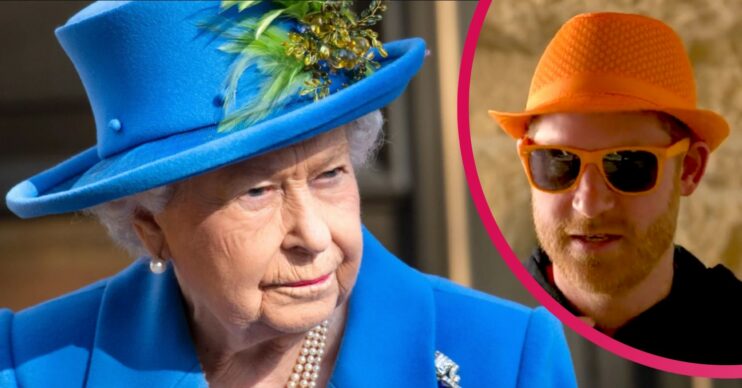 Watch the video here and make up your own mind

Prince Harry has come under fire from critics after appearing in a lighthearted Invictus Games video to promote the foundation.

The Queen‘s grandson wears an orange hat and sunglasses in the silly skit. And he goes on to strip off and reveal he’s wearing an orange top and shorts, too.

But some royal family fans are disappointed Prince Harry is able to make an Invictus event in Holland in April after reportedly ‘snubbing’ Prince Philip‘s memorial service at the end of this month.

The sketch portrays Invictus patron Prince Harry learning a few words of Dutch over Zoom ahead of the event.

He appears to be dialling in for a chat from his home in Montecito in California.

The clip also features the Duke of Sussex professing a love for stroopwafel, a wafer-style biscuit with a caramel filling from the Netherlands.

But the short video climaxes as Prince Harry declares himself ready to make it over for the Games at The Hague.

“Let’s go!” he says excitedly, pointing at the camera in his bright garb.

💛🖤| Prince Harry, The Duke of Sussex, is getting ready for the Netherlands with some Dutch lessons. We look forward to giving him a warm welcome in #TheHague. As we all prepare for The Games, our thoughts are with Team Ukraine, as well as their friends & family. #InvictusGames pic.twitter.com/HD7kRr3ZX7

However, hours before the video was released, it was confirmed Prince Harry will not be travelling to the UK for the Westminster Abbey service in memory of his late grandfather on March 29.

It came amid a High Court row with the Home Office over the Sussexes’ security.

Prince Harry lost his armed bodyguards when he stepped away from royal life.

But some critics have framed the decision as ‘snub‘ both to Prince Philip and his grandmother.

As with nearly any matter regarding Prince Harry, the video provoked a strong reaction on social media.

One user slammed him: “He can go to the Netherlands but not to see his own grandmother, something is not right with him.”

Another claimed: “Harry is refusing to attend his grandfather’s memorial for armed security but will go to the IG in the NL.”

But not everyone immediately stuck the boot in.

Among the many supportive tweets written about the sketch, one read: “Absolutely brilliant.

“Love it and looking forward to watching the#InvictusGames. Love that Prince Harry is still as goofy as ever.”

And another fan added: “Looking sharp in orange!”