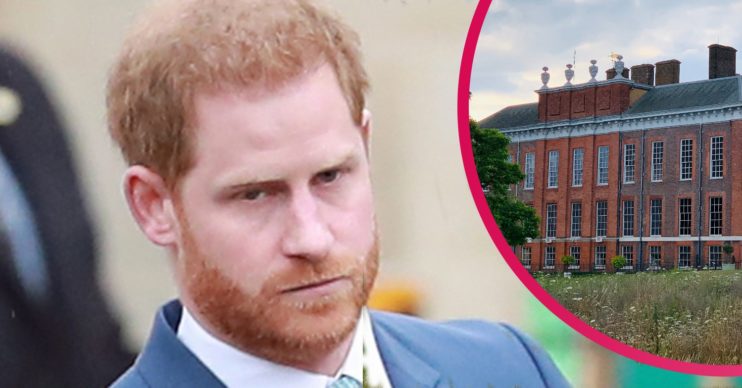 Prince Harry ‘found living in Kensington Palace like a prison’

Prince Harry reportedly disliked living at Kensington Palace so much that he likened it to like living in a prison.

The former senior royal, 35, lived at the royal residence for many years.

It is also the spot where he proposed to his wife Meghan Markle.

Royal biographer Ingrid Seward says Harry was “desperate” to get out of there.

Speaking on True Royalty TV, Ingrid said: “Harry felt this was a prison.

“He was saying that Kate can’t even walk her dog in Kensington Gardens like Diana used to go jogging.

“She can only walk it around the sort of private field. He said it is definitely a prison and he was desperate to get out.”

Kensington Palace is the home to many royals, including the London residence for Prince William and his family.

Where do Harry and Meghan live now?

Harry and Meghan lived in Nottingham Cottage at the Palace.

The cottage has two bedrooms and a private courtyard.

This is reportedly where they bonded and fell in love.

Meanwhile, in Finding Freedom, authors Omid Scobie and Carolyn Durand explain how this was the one place they had total privacy.

Here they watched Disney movies and Meghan impressed him with her roast chicken culinary skills.

However, their time here was short-lived, as they moved out to Frogmore Cottage in April 2019 – just less than a year after they married.

An estimated £2.4 million of taxpayers money was spent on refurbishments at their new home.

Since stepping down as senior royals this March, it has widely been reported that they intend to repay the costs.

However, as of June of this year, Harry and Meghan now live in a sprawling Montecito, California mansion.

In addition, there is also a tennis court, swimming pool and huge outdoor play area for their son, Archie, to enjoy.

A far cry from their cosy apartment at Kensington Palace, they are now neighbours with some of Hollywood’s elite.

Oprah Winfrey lives nearby, as does Ellen Degeneres, George Lucas and Drew Barrymore.