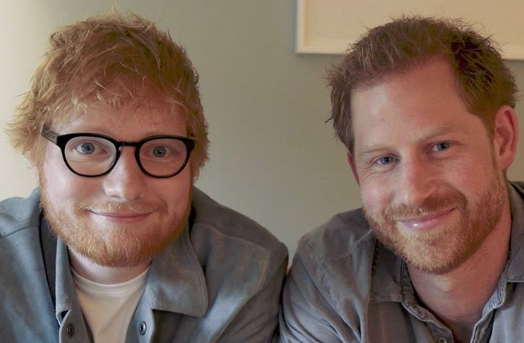 There's been a misunderstanding

The Duke of Sussex Prince Harry has teamed up with singer-songwriter Ed Sheeran in a special collaboration for World Mental Health Day.

The duo star in a hilarious new video to raise awareness of the resources and help available to people experiencing mental health issues.

In the clip, shared across Harry and Ed’s social media accounts, the Beautiful People hitmaker tells viewers he’s been invited to make a video with the prince for charity.

They sit down at a table to discuss mental health issues, but it quickly becomes clear that Ed has misunderstood the purpose of the meeting.

Prince Harry says: “This for me is a subject, a conversation that’s not talked about enough. I think people all over the world are really suffering.”

Ed, who has his laptop with him, reveals that he’s been trying to write lyrics for a new song on the subject and says: “People just don’t understand what it’s like for people like us.”

Harry looks baffled as Ed continues: “You know, with the jokes, the snide comments. I just feel like it’s time we stood up and said we’re not going to take this any more. We’re ginger, and we’re going to fight.”

“Slightly awkward,” Harry replies, adding: “There might have been a miscommunication but this is for World Mental Health Day.”

Ed is then seen deleting a song title from his laptop that reads ‘Gingers Unite’.

On his Instagram, the pop star wrote in the video’s caption: “It’s World Mental Health Day! Myself and Prince Harry, want to ensure that not just today but every day, you look after yourself, your friends and those around you.

“There’s no need to suffer in silence – share how you’re feeling, ask how someone is doing and listen for the answer, be willing to ask for help when you need it, and know that we are all in this together.”

The pair teased the video on Wednesday (09.10.19), when they had fans in hysterics by revealing Harry’s patriotic doorbell tune.

They posted a short snippet from the video that showed Ed approaching Harry’s door and ringing the bell, which causes a string of notes from God Save The Queen to peal out.