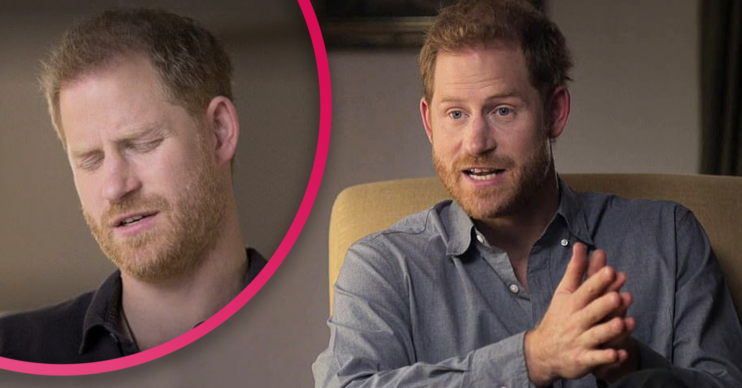 Prince Harry documentary: Seven shocking new revelations in The Me You Can’t See

From using drink and drugs to history repeating itself…

The new Prince Harry documentary series – The Me You Can’t See – has dropped on Apple TV+.

At times a heartbreaking watch, the Duke of Sussex pours his heart out on camera to Oprah.

He’s seen undergoing therapy and opens up on wife Meghan Markle‘s suicide threat and how he used drink and drugs to “mask” his feelings.

Harry also makes a number of shocking new revelations about his family.

Harry admitted to using drink and drugs to “mask” his feelings.

“But I slowly became aware that, okay I wasn’t drinking Monday to Friday, but I would probably drink a week’s worth in one day on a Friday or a Saturday night.”

He continued: “I was just all over the place mentally. Every time I put a suit on and tie on… having to do the role, and go: ‘Right, game face.’

“I’d look in the mirror and say: ‘Let’s go.’ Before I even left the house I was pouring with sweat. I was in fight or flight mode,” he concluded.

The Duke of Sussex also hits out at his family in the series.

He said: “Certainly now I will never be bullied into silence.

Speaking of Meghan and their decision to step down as senior royals, he said: “We spent four years trying to make it work.

Read more: Prince Harry responds to ‘unethical’ treatment of his mother by the BBC

“We did everything that we possibly could to stay there and carry on doing the role and doing the job. But Meghan was struggling.

“That feeling of being trapped within the family, there was no option to leave.

Eventually when I made that decision for my family, I was still told: ‘You can’t do this.’

And it’s like, well how bad does it have to get until I am allowed to do this? She was going to end her life. It shouldn’t have to get to that.”

Meghan told Harry how she was going to kill herself

Harry said not only did Meghan want to kill herself, she also planned how she would do it.

“Meghan decided to share with me the suicidal thoughts and the practicalities of how she was going to end her life,” Harry said.

However, she later decided against it because she didn’t want Harry to lose “another woman in my life”.

“She was completely sane, yet at the quiet of night, these thoughts woke her up.

“The thing that stopped her from seeing it through was how unfair it would be on me after everything that had happened to my mum and to now to be put in a position of losing another woman in my life — with a baby inside of her, our baby.”

‘Shame’ at how he handled Meghan’s confession

Harry also said that he didn’t know how to handle her confession.

“I’m somewhat ashamed of the way that I dealt with them.

“And of course, because of the system that we were in and the responsibilities and the duties that we had, we had a quick cuddle and then we had to get changed to jump in a convoy with a police escort and drive to the Royal Albert Hall for a charity event.

“Then step out into a wall of cameras and pretend as though everything’s okay.

“There wasn’t an option to say: ‘You know what, tonight, we’re not going to go,’ because just imagine the stories that come from that.

My mother was chased to her death while she was in a relationship with someone who wasn’t white. And now look what’s happened.

“Because to be honest with you, like a lot of other people my age could probably relate to, I know that I’m not going to get from my family what I need.

“I then had a son who I’d far rather be solely focused on, rather than every time I look into his eyes, wondering whether my wife is going to end up like my mother and I’m going to have to look after him myself,” he concluded.

On the subject of Princess Diana, Harry said he fears history will repeat itself and he’ll lose Meghan in the same way.

“My mother was chased to her death while she was in a relationship with someone who wasn’t white. And now look what’s happened,” he said

“And it all comes back to the same people, the same business model, the same industry.

“They’re not going to stop until she dies. It’s incredibly triggering to potentially lose another woman in my life.”

Prince Charles also came under fire in the documentary series.

“That doesn’t make sense. Just because you suffered, that doesn’t mean your kids have to suffer. In fact, quite the opposite.

“If you suffered, do everything you can to make sure that whatever negative experiences you had, you can make it right for your kids.

On-camera therapy and how London is a ‘trigger’

Harry also revealed that he had gone through a form of therapy called EDMR.

Eye Movement Desensitisation and Reprocessing is a treatment technique for helping someone come to terms with traumatic experiences.

And Harry was seen having the therapy and carrying out a series of movements on camera.

Harry told his therapist that being in London is a trigger for him following his mother’s funeral.

“Happens every time. I can’t remember the first time it happened, I can just remember the feeling, anxiety, like a hollow empty feeling almost of nervousness, is it fear?

“Everything feels tense,” he said of visiting the capital.

One of the more heartbreaking moments in the series comes when Harry reveals his son Archie‘s first words.

“I got a photo of her [Diana] in his nursery, and it was one of the first words that he said – apart from Mama, Papa, it was then Grandma.

“It’s the sweetest thing, but at the same time, it makes me really sad because she should be here.”

A post shared by The Duke and Duchess of Sussex (@sussexroyal)

Harry also revealed that he had a “burnout” in his late twenties and blames his heavy royal workload.

“Towards my late twenties everything became really hectic for me, but to the point of exhaustion.

“I was travelling all over the place because, you know, from the family’s perspective I guess I was the person who like ”we need someone to go there. Nepal, Harry you go”.

“And it was like someone had taken the lid off. All of the emotions that I had suppressed for so many years suddenly came to the forefront.”

Harry explained: “I saw GPs, I saw doctors, I saw therapists I saw alternative therapists, I saw all sorts of people, but it was meeting and being with Meghan.

“I knew that if I didn’t do therapy and fix myself, that I was going to lose this woman who I could see spending the rest of my life with.”