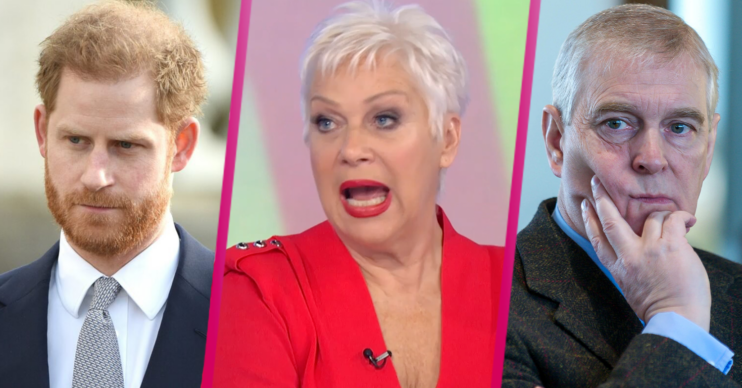 Comes in the wake of the Prince Andrew settlement

Prince Harry has been defended by Loose Women star Denise Welch amid claims he’s a “burden” on his grandmother the Queen.

Her comments came amid the news that Prince Andrew had settled his sex assault case out of court – something Denise referenced in her tweet.

Last night (February 15) it was revealed that the Duke of York had settled the lawsuit with Virgina Giuffre for an undisclosed sum.

And now Denise has had her say.

What did Denise say about Prince Harry?

Taking to Twitter, Denise defended Prince Harry, who has been vilified since his decision to step down from the royal family.

Read more: Prince Andrew to make ‘public appearance’ with the Queen next month

Referencing the impact it’s said to have had on the Queen, Denise asked her followers to consider the impact the Prince Andrew scandal has had on the 95-year-old monarch.

She said: “Prince Harry constantly gets blamed for bringing heartache and burden to the Queen in her final years.

“Let’s just remember that the Queen is funding this pay off from Andrew her favourite son.”

Prince Harry constantly gets blamed for bringing heartache & burden to the Queen in her final years. Let’s just remember that the Queen is funding this pay off from Andrew her favourite son.

How did Denise’s followers react?

Some agreed with her, but others accused her of idle “tittle tattle”.

Read more: Royal concern over Prince Harry ‘not painting Camilla in a good light’ in memoirs

One said: “It sickens me that Harry and Meghan, who are just 2 people getting on with their life, get worse press then him. How is that?”

Another commented: “My dear, it’s called double standards, as in we don’t always believe what we read in the papers… except if it’s about H&M of course!”

However, another pointed out: “You can’t say that … you don’t know …. If you know then please share where you’ve got this info from …. otherwise it’s just gossiping tittle tattle.”

“Where’s the accounts saying it’s her funding it?” asked another.

If you know then please share where you’ve got this info from …. otherwise it’s just gossiping tittle tattle.

Others commented that Harry “adds” to the Queen’s distress.

They said: “Harry just adds to it big time. Why does he want to expose his own family when he has been given everything and every opportunity for the best of everything?”

However, another perhaps summed it up best.

“Both of them are bringing heartache to the Queen. It’s not an either or situation,” the concluded.

So where do you stand on the debate? Tell us on our Facebook page @EntertainmentDailyFix.