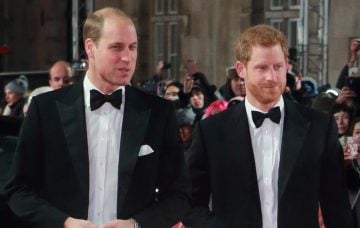 Prince Harry has confirmed what we’d all pretty much guessed: big brother Prince William will be his best man at the royal wedding!

The Duke of Cambridge has said he’s “honoured” to be asked to stand with Harry as he marries fiancée Meghan Markle on May 19.

It comes after Harry served as William’s best man when he wed Kate Middleton in 2011.

It comes as no surprise to any of us, right? But, still, it’s nice to have it confirmed!

There’s still no word on who will serve as Meghan’s bridesmaids, or confirmation that William and Kate’s children George, four, and Charlotte, two, will be page boy and flower girl.

It’s expected William and Kate’s third child, born on Monday, will not be in attendance at the wedding due to his very young age.

After exchanging vows, they will undertake a carriage procession through the streets of Windsor, before attending a lunch reception hosted by the Queen.

That will be followed by an evening reception thrown by Prince Charles.

The couple have released several details about their big day now, although a few things will be kept under wraps until the actual morning.

Meghan’s wedding dress designer will not be revealed until she arrives at the ceremony.

The guest list has also largely been kept secret for now.

We do know, however, that the couple have asked for charity donations in lieu of gifts, will have a lemon and elderflower flavoured cake, with buttercream icing and decorated with fresh flowers, and florist Philippa Craddock will decorate the venues.

More than 250 members of the Armed Forces will provide ceremonial support on the big day, in a nod to Harry’s military background, while a full list of music for the ceremony has also been confirmed.