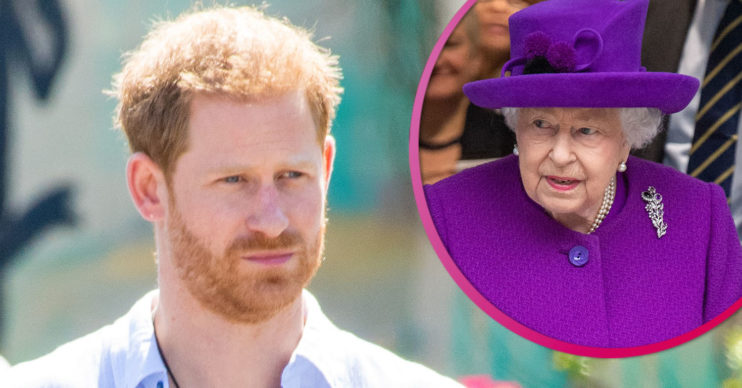 Harry reportedly fell out with the Queen over Meghan Markle

Prince Harry and the Queen reportedly fell out over Meghan Markle’s choice of tiara on her wedding day.

The journalist claims that Meghan was able to wear her tiara of choice – Queen Mary Diamond Bandeau.

But there may have been some pushback from a certain royal employee.

This comes after rumours that Meghan had originally wanted to wear an emerald one.

An insider told The Sun at the time that the Queen put her foot down regarding Meghan’s alleged demands.

The insider said: “There was a very heated exchange that prompted the Queen to speak to Harry.

“She said, ‘Meghan cannot have whatever she wants. She gets what tiara she’s given by me’.”

However, Omid has hit back at these claims and says that his book will reveal a very different story.

Taking to Twitter, he addressed the rumours in view of his some 51,000 followers:

Royal author hits back at Harry and the Queen rumours

“NO. JUST NO. The book does NOT say this. It actually refutes this played out tale.”

Read more: The Queen will be ‘most upset’ by Finding Freedom claims

Harry reportedly argued with the Queen’s royal dresser, Angela Kelly, over the tiara.

An article for People, retweeted by Omid, appears to confirm that this shall be covered in the book.

The article includes: “Finding Freedom reports that in fact, there were no disagreements between Meghan and the Queen about her chosen tiara.

“Rather, the conflict existed between Harry and Kelly. (The hair trial, the book reports, ultimately went forward with no hesitation from the Queen.)”

Despite this, a spokesperson for both Meghan and Harry have denied any involvement in the upcoming publication.

The spokesperson said: “The Duke and Duchess of Sussex were not interviewed and did not contribute to Finding Freedom.

“This book is based on the authors’ own experiences as members of the royal press corps and their own independent reporting.”

Excited to announce that #FindingFreedom, a biography written by myself and @CarolynDurand, will be available worldwide in August.

For the first time, go beyond the headlines and discover the true story of Prince Harry and Meghan, The Duchess of Sussex.https://t.co/A7B06EMaDa pic.twitter.com/KjGD9DcXaV

Meanwhile, the book, set for an August 11 date, alleges that Meghan and Harry’s decision to leave the royal family was a long time coming.

One excerpt reads: “For months the couple tried to air these frustrations, but the conversations didn’t lead anywhere.

“Worse, there were just a handful of people working at the palace they could trust.

“Outside this core team, no information was safe.”