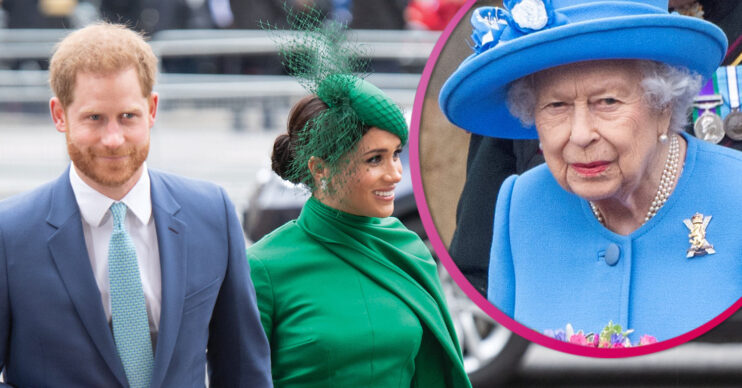 They could come back in September

Prince Harry and Meghan Markle could make a return to the UK in September with their two children, Archie and Lilibet.

Reports have suggested the couple may come back to attend a memorial service in honour of Harry’s late mother, Princess Diana.

Harry recently attended the unveiling of a Diana statue alongside his brother Prince William to mark what would have been her 60th birthday.

However, it became scaled down due to COVID-19 restrictions and now reports say a bigger celebration could happen in September.

Harry and Meghan returning to the UK?

Royal expert Russell Myers has said if Harry and Meghan bring their two children with them in September, the Queen will feel happy.

Read more: Prince Harry news: Duke ‘to return to the UK for another Princess Diana memorial in September’

He said on today’s Lorraine: “There may be another bigger memorial for Princess Diana in the pipeline in September.

“And it has been rumoured that Harry may come over with the kids and with Meghan.”

He continued: “Obviously this will be fantastic for the rest of the family because they have not seen the two little ones.

“I’m sure the Queen will be overjoyed.”

Host Lorraine Kelly added: “Babies are the best thing for bringing people together.”

Meghan and Harry welcomed their daughter, Lilibet Diana, on June 4.

The name Lilibet is after Her Majesty as that’s her family nickname, while Diana is a tribute to Harry’s mother.

Harry recently opened up about his daughter during an appearance in the UK during his recent visit.

The Duke of Sussex attended a WellChild Awards party at Kew Gardens alongside other famous faces, including singer Ed Sheeran.

Harry told a guest about Lilibet: “We’ve been lucky so far, she’s very chilled and seems happy to just sit there while Archie is running around like crazy.”

He also admitted to Ed that two children “is definitely a juggle”.

Would you like to see Harry, Meghan, Archie and Lili come to the UK? Leave us a comment on our Facebook page @EntertainmentDailyFix and let us know.