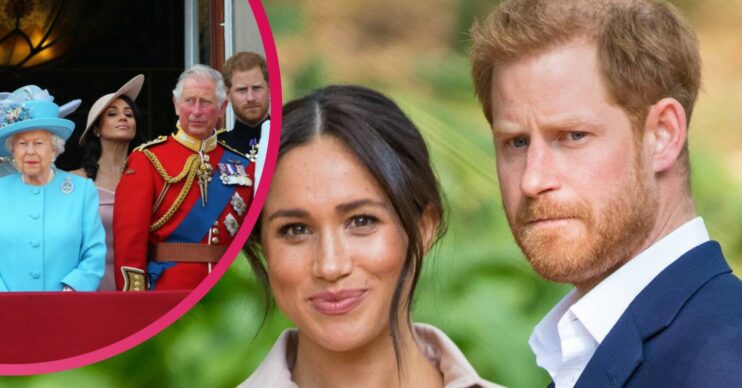 Prince Harry and Meghan Markle’s claims of “royal racism” has increased the danger of attacks on the monarchy, an expert has claimed.

The couple previously shocked the world after they refused to name the royal in question during their Oprah Winfrey interview.

But has it caused even more harm for the Queen and her family?

It comes after a teenager was arrested for reportedly scaling the fence of Windsor Castle on Christmas Day.

It’s believed the suspect was attempting to “assassinate the Queen”.

He wrote: “I genuinely worry that Prince Harry and #Meghan’s criticism of unnamed ‘racist’ royals has increased the danger of attacks on the #Royal Family.

“Security needs to be stepped up as a result.”

The tweet was met to a mixed response, with one user agreeing: “From the day that aired & since, I have hoped the Cambridges would increase their security.”

I genuinely worry that Prince Harry and #Meghan's criticism of unnamed 'racist' royals has increased the danger of attacks on the #Royal Family. Security needs to be stepped up as a result

A second added: “That sounds about right. They are so self focused they don’t consider the consequences of their words.”

A third wrote: “I think you’re right Richard, although it’s a danger they live with daily.”

However, others hit back at the royal reporter over the tweet.

Security needs to be stepped up as a result

One shared: “What an incredibly irresponsible thing to say! Do you have any evidence to back this up or are you just trying to paint a target on the Sussexes and increase their security risks because you don’t like them?”

Another tweeted: “I genuinely worry that Richard Eden constant unfounded criticism of the Duchess of Sussex has increased through the years the danger of attacks against her. Security needs to be stepped up as a result.”

A third added: ‘So H and M shouldn’t report racism aimed at them. Ok…”

A fourth posted: “Are you similarly genuinely worried about your criticisms of Prince Harry and Meghan?

“Do you think such inflammatory comments might increase the danger of attacks on them?”

ED! has reached out to Harry and Meghan’s representative for comment.

What did Meghan and Harry reveal?

Earlier this year, the couple spoke to chat show host Oprah and claimed that a member of the royal family had questioned what colour Archie’s skin would be when he was born.

However, they later admitted that it wasn’t the Queen or Prince Philip.