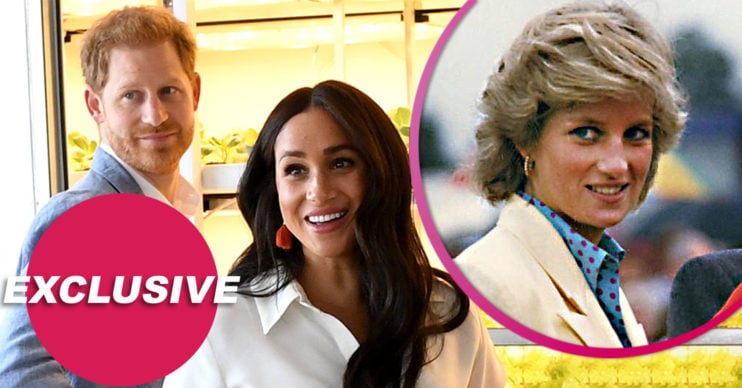 Harry and Meghan already have a son, Archie, together

Meghan Markle is pregnant with her second baby and speculation has began on what she and Prince Harry will name their child.

The Duke and Duchess of Sussex announced their baby news in a statement on Sunday (February 14).

They shared a photo of the couple sitting under a tree as Meghan cradled her bump.

Many bookies and royal fans have began thinking about baby names and Diana has been thrown into the mix as a tribute to Harry’s late mother, Princess Diana.

What will Meghan and Harry name their second baby?

However, author of Prince Philip Revealed and Editor in Chief of Majesty magazine Ingrid Seward has said that could be a “bit too obvious”.

Speaking exclusively to Entertainment Daily, Ingrid said: “Maybe Diana would be a bit too obvious and they would be accused of trying to cash in on Diana.

“But I am sure it will be amongst the names or Frances – Diana’s second name.”

She continued: “As Meghan looks about 5 months pregnant I guess they know what sex it is as LA girls don’t like surprises.

“I think they favour quite old fashioned names so I don’t imagine it will be anything crazy.

“Meghan may have a favourite in mind but they are not obliged to choose one favoured by the royal family.”

Arthur and Diana are 10/1 joint favourites with Betfair to be the name choice for the couple’s second baby.

What are bookies’ predictions?

Abigail, a new name on the list, has gone straight into 14/1 joint third favourite.

Betfair spokesperson Sam Rosbottom said: “Having picked Archie – a name that wasn’t even on our list, for their first child – the odds suggest Meghan & Prince Harry could opt for a more traditional name for their second…

“…with Arthur and Diana the joint 8/1 favourites with Betfair.

“Abigail, a new name on the list, is straight into 14/1 third favourite.”

What do you think Meghan and Harry could name their baby? Let us know on our Facebook page @EntertainmentDailyFix.