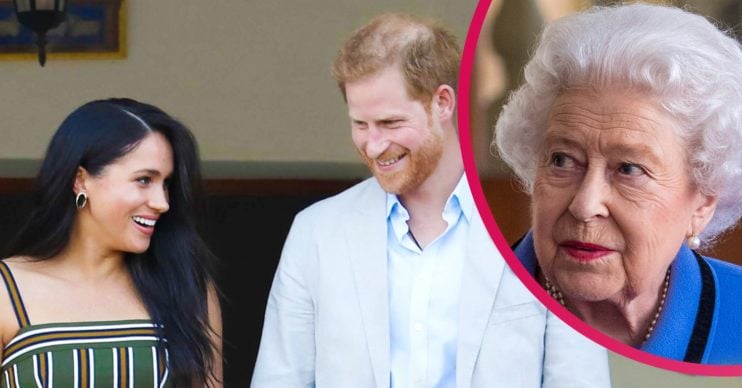 Prince Harry and Meghan Markle were reported to be planning to set up their own awards system to rival that of The Queen’s.

The Duke and Duchess of Sussex, apparently plan to deliver awards to deserving members of the public through their new charity Archewell.

The Queen has her own set of prestigious awards, which include Knighthoods, CBEs, MBEs and OBEs.

Court documents obtained by The Sun show that the awards will be organised into areas of specific achievement.

Who will Meghan Markle and Prince Harry give the awards to?

However, Harry and Meghan have denied that this is the case. Their spokesperson has confirmed with ED that these awards will not in any way rival The Queen’s Honours List.

They said: “We look forward to sharing more about Archewell’s work in the weeks ahead but any suggestion that it is intended to rival the UK honours list is false.

“Furthermore, the trademark application has followed the normal course of business for the US Trademark process and any suggestion otherwise is also false.”

Read more: The Queen ‘to inform the public when she has her COVID vaccine’

This news comes just as Prince William and Kate Middleton launched their surprise thank you tour aboard the royal train.

The Duke and Duchess of Cambridge set off on their whirlwind tour to thank key workers on Sunday evening.

As they departed from Euston train station, they were serenaded by none other than Shakin’ Stevens.

Why are Prince William and Kate Middleton on a ‘Thank You’ tour?

The iconic singer sang his Christmas classic Merry Christmas Everyone.

He said he was honoured and over-the-moon to sing before royalty.

Skakin’ Stevens, real name Michael Barratt, said: “I’m loving it, it was lovely to be invited.

“And it was them who chose the song. Over the moon.”

To start off they thanked rail workers in London, who kept transport moving throughout this year.

Prince William told Alero Abbey, TfL area manager for Green Park and Euston: “It’s moments like this when people really appreciate what you do every day. Suddenly we all know what you do and that you do a really good job.”

As for Harry and Meghan, it is likely that they will reconvene with The Queen and Prince Charles in early 2021.

In March of next year it will be one year since they stepped down as senior royals with the Royal Family.

It is understood that the terms and conditions of their negotiations will be reviewed by both The Queen and Prince Charles in March 2021.

Prince Harry is reportedly keen to have his military titles reinstated.

While Prince Charles is allegedly concerned about his son’s mega-deal with Netflix.

In fact, the latest series of The Crown portrayed The Duke of Cornwall poorly, which puts Harry in a somewhat awkward position.

He and Meghan have a Netflix deal worth an estimated £100 million.