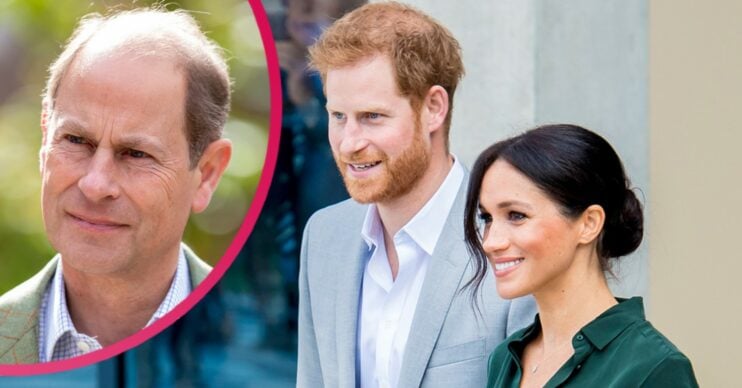 'It's difficult for everyone but that's families for you'

The Earl of Wessex, 57, spoke out about the Sussexes in a new interview with CNN this week.

During the chat, Edward opened up about the “excessive intrusion” all senior royals have faced over the years – but ultimately wished the pair luck.

What did Edward say about Prince Harry and Meghan Markle?

When asked about the “family rift which is undeniably there”, he joked: “Are you euphemistically referring to Harry and Meghan?

“It’s very sad. Weirdly we’ve all been there before – we’ve all had excessive intrusion and attention in our lives.”

In addition, the Duke shared: “We’ve all dealt with it in slightly different ways, and, listen, we wish them the very best of luck.

We’ve all dealt with it in slightly different ways, and, listen, we wish them the very best of luck.

Edward later added: “It’s difficult for everyone but that’s families for you.”

Furthermore, the Queen’s youngest son congratulated the couple on the birth of their newborn daughter, Lilibet.

He went on: “Fantastic news about the baby – that’s great. I hope they’ll be very happy.”

And Edward also opened up about his mother, Her Majesty, who sadly lost her husband Prince Philip in April.

Harry and Meghan hit back at name claims

Meanwhile, Edward’s interview comes days after Harry and Meghan were forced to hit back at false reports.

The couple, who welcomed their daughter Lili on June 4, shared a statement to address rumours they ‘didn’t ask’ the Queen for permission to use the name.

Despite the family rift, it’s also believed Harry is in “regular” contact with his father, Prince Charles.

It comes after the Duke, 36, made a series of claims against his family in a number of interviews.

Last month, Harry appeared to make a dig at Charles’ parenting during a podcast appearance with Dax Shepard.

In addition, he also accused the royal family of “total neglect” during his Apple TV+ mental health series, The Me You Can’t See, with Oprah Winfrey.