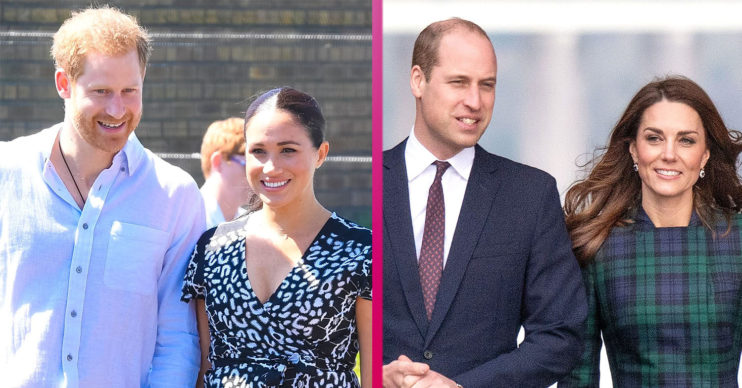 Brothers Harry and William allegedly fell out when Meghan came into the picture.

However, it’s now reported that the pair’s relationship is “much better than it was”.

A source told Vanity Fair: “I have no doubt they will be video calling each other over Christmas.”

The report added that the “Sussexes have sent Christmas gifts to the Cambridge family”.

How did Harry and William’s rift begin?

According to the authors of Finding Freedom, Omid Scobie and Carolyn Durand, the pair’s relationship broke down over Harry’s marriage to Meghan.

I have no doubt they will be video calling each other over Christmas.

The Duke of Cambridge reportedly urged his younger brother not to rush into tying the knot with the former actress.

He also apparently used “this girl” to describe Meghan, something Harry took a dislike to.

The authors wrote: “In those last two words, ‘this girl’, Harry heard the tone of snobbishness that was anathema to his approach to the world.”

Meanwhile, the book – which promised to reveal the true story of Meghan and Harry’s life – claims Harry felt that royal staff favoured William.

The writers added: “Harry was upset that it was playing out so publicly and that so much of the information being reported was wrong.

“There had been moments where he felt people working with his brother had put things out there to make William look good, even if it meant throwing Harry under the bus.”

In addition, the relationship between the brothers and their wives allegedly fractured even more when Harry and Meghan stepped back from royal life.

Earlier this year, William and wife Kate reportedly reached out to Meghan and Harry after she suffered a miscarriage in July.

It’s believed the heartbreaking news could end up bringing them all back together.

A royal expert told OK! Online: “I’m told that William and Kate were in touch with Harry and Meghan when this happened in July. The whole family has reached out to offer support.

“I don’t know if the royal family were aware she was set to go public with this but they would think it was a hugely brave thing to do.”

She added: “I do think a situation like this is what will help heal rifts and bring the family back together. Hard times like this encourage communication.”

Do you think Harry and William will heal their rift? Leave us a comment on our Facebook page @EntertainmentDailyFix.