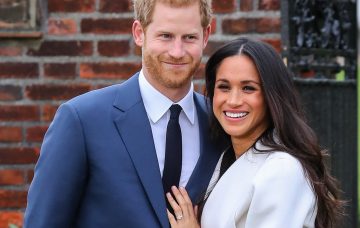 Musicians who will perform at the ceremony have been announced

With just over three weeks until Prince Harry and Meghan Markle tie the knot, more details about their church ceremony have been revealed.

The official website of the British Royal Family has shared details of the array of musicians who will fill St George’s Chapel at Windsor Castle with joyous music on the special occasion.

The press release states that: “Both Prince Harry and Ms. Markle have taken a great deal of interest and care in choosing the music for their Service, which will include a number of well-known hymns and choral works.  The music will be under the direction of James Vivian, Director of Music, St George’s Chapel.”

Mr. Vivian said: “The Choristers, Lay Clerks, Organists and I are very much looking forward to this exciting day and are pleased to be performing at the service music chosen by the couple.

“We are also looking forward to welcoming to St George’s musical colleagues from near and far who will be performing at this very special and joyful occasion.”

The service will begin at midday on Saturday, 19 May, with the Archbishop of Canterbury, Justin Welby, officiating.

Music will be a big part of the ceremony, from the organist who will play as Meghan walks up the aisle, to the State Trumpeters of the Band of the Household Cavalry who will provide “ceremonial support”.

The hymns will be led by the Choir of St George’s Chapel, made up of 23 boy choristers from St George’s School and twelve Lay Clerks singing alto, tenor and bass.

There will also be a gospel choir performing. The chosen group are Karen Gibson and The Kingdom Choir, who are based in the South-East of England.

The choir “has become known for its united sound, warm energy and enthusiastic performance.”

Karen Gibson said: “The Kingdom Choir is truly honoured to be invited to sing at the wedding of Prince Harry and Ms. Markle, and very excited to be taking part in such a historic moment.

“It will be a moment that we will always treasure, and we’d like to take the opportunity to wish the couple all the very best for their coming union.”

Meanwhile, solo singer Elin Manahan Thomas, a Welsh soprano, will perform supported by an orchestra made up of musicians from the BBC National Orchestra of Wales, the English Chamber Orchestra and the Philharmonia.

It’s likely her performance will come as Harry and Meghan sign the register with witnesses after saying their vows.

She tweeted her excitement after her involvement was announced today.

“I’m thrilled to have been asked to sing at such a momentous occasion. It’s always an honour to be invited to be a part of a wedding, and getting to share in a couple’s big day is very special. Good luck to everyone with the preparations!” she wrote.

Another solo performer will be 19-year-old cellist, Sheku Kanneh-Mason, who was personally invited to play by the Suits actress herself.

“I was bowled over when Ms. Markle called me to ask if I would play during the ceremony, and of course I immediately said yes! What a privilege to be able to play the cello at such a wonderful event. I can’t wait!”

These are the details for the music for the more formal part of the day – it’s not yet known who will take to the stage for the evening reception when the couple and their guests hit the dance floor.

It was Ellie Goulding who had the honour of singing when the Duke and Duchess of Cambridge had their first dance – and Harry and Meghan can take their pick of chart topping performers.

Ed Sheeran, Stormzy and Sam Smith have all said they’d jump at the chance to perform if asked.

But the most highly tipped to be there are the Spice Girls, following their reunion earlier this year.

Mel B let slip on US show The Real in February that she was set to attend, and that the rest of the Spice Girls have also been invited.

“I’m not sure if I should have said that. Why am I so honest?” she said.

She didn’t officially confirm they would be performing at the reception when asked, but the presenters took her inability to deny the question as confirmation.

“I need to go. I’m going to be fired,” Mel B said as the presenters danced and screamed around her.

James Corden put Victoria Beckham in a similarly awkward spot when she appeared on his Late, Late Show last week.

The mother-of-four looked visibly awkward and fumbled her words as she replied: “I… I… I don’t know,” after James asked her: “Are you going?”

He then laughed at her reaction, saying: “You’re totally going! Well, how exciting, it will be wonderful.”

Victoria, 43, then seemed to confirm the news by saying: “Yes. England is so excited. It’s so great isn’t it and so happy.”

But as Victoria and husband David both attended Prince William’s wedding as guests, it could be they will just be there for the day and not for Victoria to perform with the Spice Girls.

She’s also been tipped as one of the favourites to have designed Meghan’s wedding dress, although she denied this to James.

Who do you think will perform at the royal wedding reception? Leave us a comment on our Facebook page @EntertainmentDailyFix and let us know what you think!