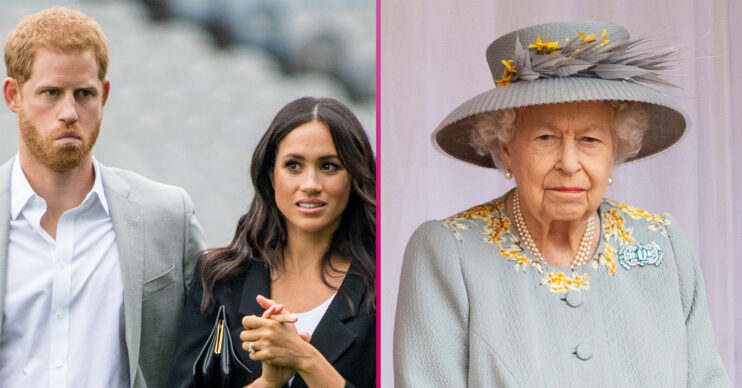 She claims Harry knows his grandmother has "great tolerance"

In her latest YouTube video, the socialite discussed the Duke and Duchess of Sussex‘s numerous attacks on the Royal Family.

Lady C said Her Majesty, 95, has a “great tolerance” and Harry knows that about his grandmother.

Prince Harry and Meghan ‘taken advantage of the Queen’

Lady C said: “Harry knows that the Queen is a very tolerant person and so he and the wife have been taking full advantage of her tolerance…

“… in the hope that they would get away with everything.

“Nor are they going to get away with everything indeed as I’ve said before, the fight back has started.”

Meanwhile, Lady C claimed Meghan and Harry have “sullied” Prince William and Kate Middleton‘s reputation as well as the family’s.

Lady C also claimed that Harry has “always been jealous” of his brother.

She said: “Harry has always been jealous of William because William was going to be king.

“Harry used to say when he was a little boy, ‘I’ll be king’, he was happy to offer himself. He’s always wanted to be number one.”

Meanwhile, Harry and William recently reunited at the unveiling of a Princess Diana statue at Kensington Palace.

The statue honoured what would have been their mother’s 60th birthday.

According to body language expert Adrianne Carter, the brothers appeared relaxed and comfortable with each other during the event.

She added to us: “I didn’t see anything that could indicate there was trouble between them at all.”

ED! has contacted reps for Harry and Meghan for comment.

What do you think about Lady C’s comments? Leave us a comment on our Facebook page @EntertainmentDailyFix and let us know.