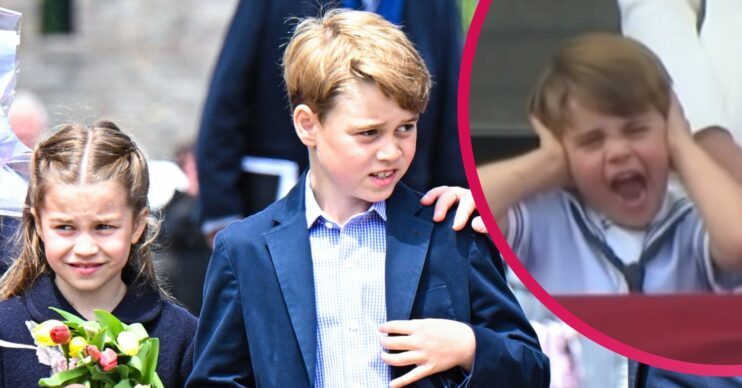 Prince George and Princess Charlotte are learning the ropes during the Queen’s Platinum Jubilee celebrations.

And as they arrived in Cardiff today alongside their parents the Duke and Duchess of Cambridge, they stole the show.

But despite the overwhelming love for the young royals, fans were all left asking one thing: where is Louis?

Read more: 5 reasons why Princess Charlotte is our most favourite royal ever

Prince George and Princess Charlotte looked picture perfect as they joined their mum and dad meeting people and collecting flowers on Saturday, June 4.

The Cambridges were in the Welsh capital visiting concert rehearsals at Cardiff Castle. The special Platinum Jubilee Celebration Concert is taking place in the castle grounds this afternoon.

It is George and Charlotte’s first official visit to Wales and also one of the first times they have greeted members of the public.

Charlotte held tightly to Kate’s hand while wearing a navy frock coat and Mary Jane shoes. Meanwhile, Kate dazzled in a long coat in the colour of the Welsh dragon.

The children seemed to be enjoying their visit with Charlotte at one point giggling as she helped conduct an orchestra.

“This is so cute,” wrote one royal fan.

“Prince George and Prince Charlotte collecting flowers from fans in Wales is the cutest thing ever!” added another.

A third said: “Adorable photo of Princess Charlotte offering a flower to Prince George. They have such a sweet brotherly and sisterly bond!”

However, some royal fans were disappointed not to see Prince Louis, whose adorable behaviour stole the show during the balcony appearance on Thursday (June 2).

They questioned where he was and said they were “missing” him.

Many tweeters asked simply: “Where is Prince Louis?”

Another added: “Where is Prince Louis? We need round two of his facial expressions.”

Complimenting Charlotte and George, someone else said: “Sweet, well mannered children but where’s Prince Louis when we need him most?”

However, several other commenters pointed out as Louis is only four it would be too much for him to have come along on this trip.

On Thursday royal watchers were in love with Louis.

Firstly he was ticked off by big sister Charlotte for waving his hand too much, but didn’t listen and continued waving.

Then he pulled numerous faces and put his hands over his ears at the sounds of the Flypast.