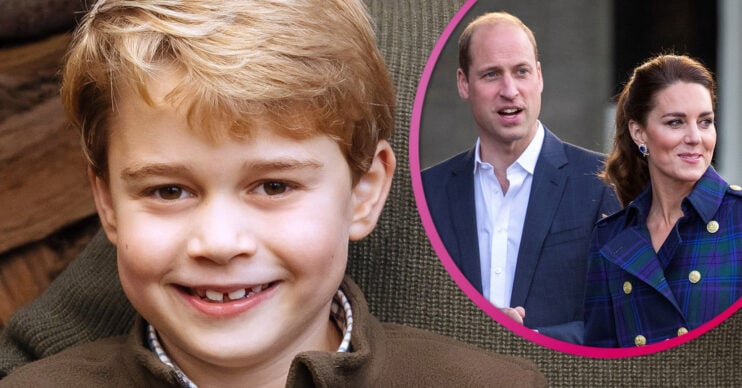 Prince George celebrates his eighth birthday today and a photo has been released to mark the occasion.

The young royal, who is third in line to the throne, was born on July 22, 2013 and is the eldest child of Prince William and Kate Middleton.

The couple released a new picture of George via Instagram to celebrate his birthday.

It shows George grinning for the camera while wearing a navy and orange t-shirt and sitting on a Land Rover, the car associated with his great-grandfather Prince Philip.

The post read: “Turning eight(!) tomorrow. [Photo] by The Duchess.”

Read more: William and Kate will keep Prince George ‘out of the limelight’ after Wembley abuse, royal expert claims

Fans gushed over the image with many saying he looks just like his dad William.

One said: “He looks so much like his dad!”

A third added: “He looks more like William every day. Gorgeous boy!”

George often captures the nation’s heart when he’s seen out in public. Here’s some of his cutest photos.

Most recently, George attended the Euro 2020 final between England and Italy.

He looked super cute in a suit just like his dad William.

According to royal expert Duncan Larcombe, George wanted to be just like his dad.

Last year, a photo of George showed the youngster showing off his gap-toothed smile.

Another picture saw George wearing a camouflage t-shirt while smiling for the camera.

The post read: “Sharing a [photo] taken by The Duchess ahead of Prince George’s seventh birthday tomorrow!”

2020 outing with William and Kate

George looked cute in a red and black striped top and black trousers.

In a photo released to mark William’s birthday and Father’s Day last year, the duke cuddled all three of his kids.

George, Charlotte and Louis dived on their dad as they all smiled.

In addition, the little boy looked adorable as he flashed his cheeky grin for the camera.

The post read: “The Duke and Duchess of Cambridge are very pleased to share new photographs of Prince George to mark His Royal Highness’s sixth birthday.

“This photograph was taken recently in the garden of their home at Kensington Palace by The Duchess of Cambridge.”

Meanwhile, another sweet picture we couldn’t leave out shows George waving from the Buckingham Palace balcony.

During Trooping the Colour in 2015, George – then almost two – gave a little wave to the public.

He was held by dad William.

Meanwhile, George is reportedly aware that he could become King one day.

According to a royal author, William and Kate told George about his royal future around his seventh birthday.

Robert Lacey said in an updated version of his book Battle of Brothers: “Sometime around the boy’s seventh birthday in the summer of 2020 it is thought that his parents went into more detail about what the little prince’s life of future royal ‘service and duty’ would particularly involve.”