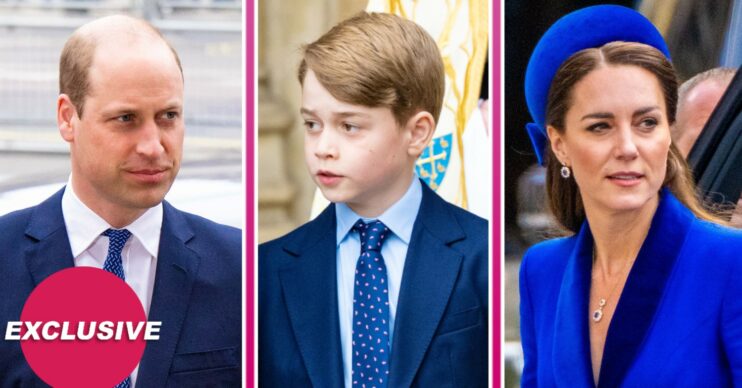 Prince George, who is celebrating his ninth birthday today, is set for a “special upbringing” as a future King, a royal commentator has claimed.

George is the eldest child of Prince William and Kate Middleton and is third in line to the throne.

Even though George could be King one day, William and Kate have “arranged matters” so that he has a “normal childhood as possible”, royal commentator Richard Fitzwilliams has said.

Mr Fitzwilliams has exclusively told Entertainment Daily!: “William and Catherine have arranged matters so that George has had as normal a childhood as possible.

“He appears periodically, with photographs released on birthdays and anniversaries.

“He has attended events such as Trooping the Colour, the Chelsea Flower Show and Wimbledon as well as accompanying his parents on trips abroad and attending sporting events.”

The expert continued: “As he is the future king his upbringing will certainly be special.

“Gradually this will become evident, at Wimbledon, where he appeared without a sibling, Catherine was quoted as saying it was ‘his treat’.

“However, at such a young age the emphasis will be on as much normality as possible for him and his siblings as, when they do appear, the scrutiny surrounding them is positively seismic.”

Mr Fitzwilliams added that the children will reportedly attend the same school in Windsor once the Cambridges have relocated.

To mark the occasion, the Duke and Duchess of Cambridge released a new picture of their son.

William and Catherine have arranged matters so that George has had as normal a childhood as possible.

It shows George smiling at the camera while wearing a blue polo shirt.

Royal fans loved the image of the young prince and gushed in the comments.

One said: “What a fantastic photo! George looks so much like his dad.”

Another wrote: “He looks just like William to me! Beautiful boy. Happy birthday Prince George.”

“What a happy chap George is,” a third commented.

Leave your birthday messages for Prince George on our Facebook page @EntertainmentDailyFix!