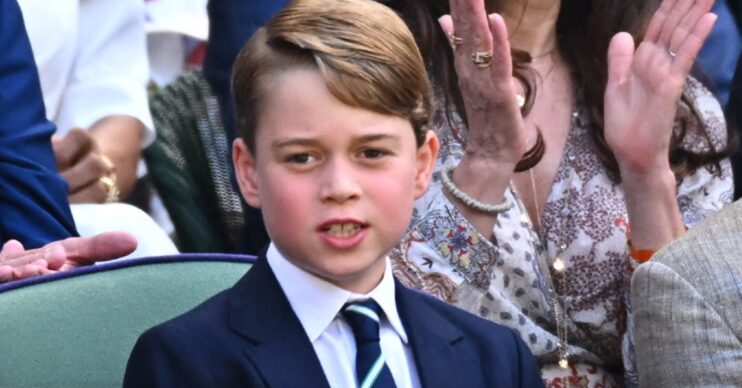 ‘Strategic reason’ Prince George was at Wimbledon with Kate and William

The youngster appeared to be enjoying the attention

Prince George was at Wimbledon on Sunday, and now the reason for Prince William and Kate Middleton bringing him along has apparently been revealed.

George, eight, sat in the Royal Box alongside his parents.

The youngster appeared to be enjoying the day out, and seemed happy to be among the cheering crowds.

Body language expert Darren Stanton says the decision to have George at the event was likely a calculated one.

Prince George was at Wimbledon

“Eventually, George will find himself next in the line of succession,” he said on behalf of Slingo. “Therefore it’s important to Kate and William for George to be familiar with being in the public eye.

“They’re choosing not to shield him to a certain extent, and treating him to a day out at Wimbledon – one of the most popular sporting events on the calendar – not only puts him on the world stage, but ensures he won’t lack confidence dealing with the public or attending official ceremonies later on in life.

“He’ll instead be equipped with the experience to take it in his stride.”

The expert suggested that William and Kate are keen to spur a sense of duty in George from a young age.

In doing so, it will likely aid him in his life as a royal as he grows older.

In addition, Darren added: “Such a strategic move hints at the type of parents Kate and Will are and intend to be, proving that not only are they hands on, but they’re determined to instill the importance of the family’s duties as Royals within their children.”

However, while royal fans loved seeing George out with his parents at Wimbledon on Sunday, some people expressed concerns about his attire.

On social media, some royal followers were worried about the youngster wearing a smart suit in scorching sunshine.

One person said on Twitter: “Why is Prince George in a SUIT at Wimbledon on a hot day?? He’s a child at a tennis tournament.”

Meanwhile, another wrote: “”It’s too hot for a suit today, seriously let the kid have some fun and be more relaxed…”

What did you think of Prince George at Wimbledon? Leave us a comment on our Facebook page @EntertainmentDailyFix and let us know.