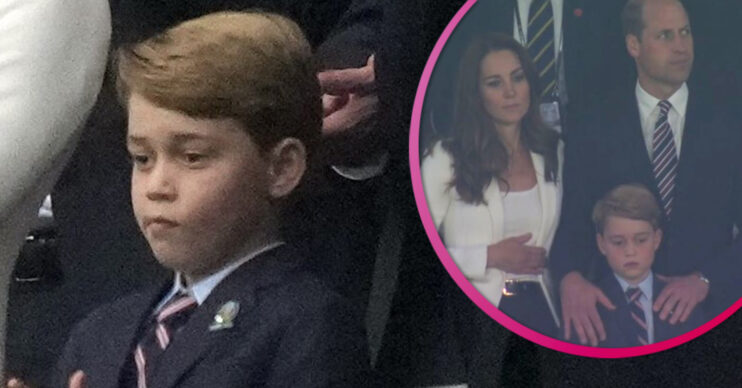 The young prince attended the game on Sunday night

Prince George attended the Euro 2020 final last night and his reaction to England losing summed up how we all felt.

England lost against Italy during last night’s intense final after it went to a penalty shootout.

George, seven, was watching the game alongside his parents Prince William and Kate Middleton.

He looked absolutely gutted – just like the rest of us – as England lost out on the win.

The young royal, who is third in line to the throne, looked devastated in the stand as his dad William put his hands on his shoulders.

The Duke and Duchess of Cambridge also looked gutted, with Kate putting her arm around them both.

Following the defeat, William paid tribute to the England squad on Twitter.

The sadness on Prince George’s face represents all of England: pic.twitter.com/zkUiHL0i3A

The duke wrote: “Heartbreaking. Congratulations @Azzurri on a great victory.

“@England, you’ve all come so far, but sadly this time it wasn’t our day.

“You can all hold your heads high, and be so proud of yourselves — I know there’s more to come. W.”

A win for England would have been the men’s football team’s first big tournament victory since the 1966 World Cup.

Last night’s game got off to a cracking start, with Luke Shaw scoring a goal in the first two minutes.

Royal fans couldn’t get over George’s adorable reaction to the goal.

The young royal jumped up in excitement as he hugged his dad William, who looked equally as thrilled.

George then sweetly wrapped his arms around mum Kate as they all cheered.

Fans took to Twitter to gush over the touching moment.

Adore this clip. The future Kings cheering for England. pic.twitter.com/JIrD4dKiKa

One person said: “Why so adorable Prince George? Much love for the Cambridges.”

Another gushed: “Adore this clip. The future Kings cheering for England.”

One added: “Prince George has been the highlight for me. The way he hugged Kate with happiness at the goal was adorable.”

Did you watch last night’s Euro 2020 final? Head to our Facebook page @EntertainmentDailyFix and let us know your thoughts.