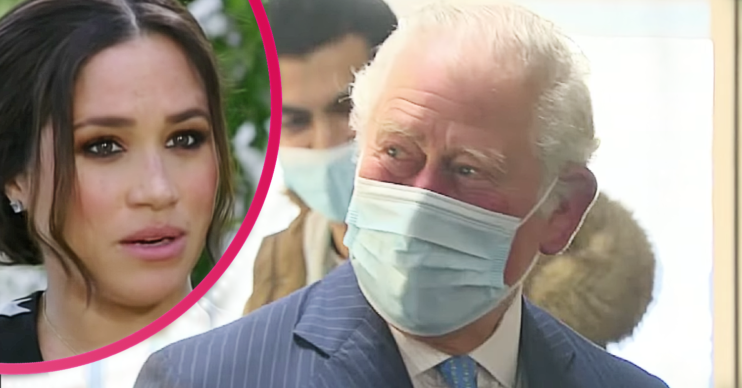 The prince visited a vaccination centre

Prince Charles has made his first public appearance since the Harry and Meghan interview.

However, when reporters asked Charles about his son’s comments in the interview, he declined to answer.

Where did Charles visit after the Harry and Meghan interview?

During his tour of the pop-up vaccination centre, the prince wore a face covering and appeared in good spirits as he toured the establishment.

He was seen chatting to a Nigerian lady and said: “Oh fantastic, yes, I’ve been there. Lots of different ethnic groups.

Sir, what did you think of the interview?

“Do give them my kind regards next time you speak to them.”

However, it was a different story when the prince was asked about the interview.

“Sir, what did you think of the interview?” a reporter quizzed.

The prince merely smiled and declined to answer.

The prince’s public appearance was the first since his son Harry and wife Meghan Markle appeared on US television for an interview with Oprah Winfrey.

During the no-holds-barred chat, the couple opened up about their experiences as members of the royal family.

They also explained the circumstances surrounding their much-publicised exit from royal duties.

What did Harry say during the interview?

During the interview, Harry and Meghan made several incendiary claims.

The duchess claimed that prior to baby Archie’s birth, one member of the royal family had asked how “dark” the colour of his skin would be.

Read more: Six questions that must be addressed after THAT Prince Harry and Meghan interview

Harry also said that there was a lot of “hurt” between him and his father, and that Prince Charles had stopped taking his calls.

“I feel really let down because he’s been through something similar, he knows what pain feels like, and Archie is his grandson,” Harry said.

“But at the same time, of course I will always love him.”