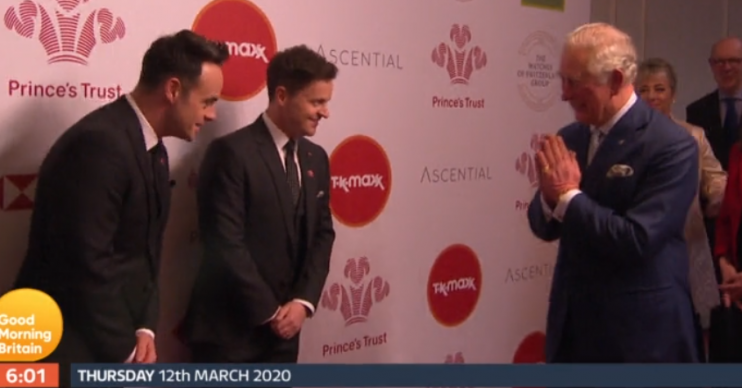 Ant and Dec were among those he greeted

Prince Charles has ditched the traditional handshake in favour of a prayer gesture in an apparent bid to help slow the spread of coronavirus.

Amid reports the UK death toll from the deadly flu-like bug has risen to eight, the Prince of Wales has been pictured offering people a namaste-style greeting.

At the Prince’s Trust Awards on Wednesday (March 11, 2020) evening, Charles smiled and put his palms together instead of offering handshakes to those gathered for the annual ceremony.

Among those he opted not to shake hands with were Saturday Night Takeaway presenters Ant McPartlin and Dec Donnelly, who were seen to return the prayer gesture as they met the royal.

Discussing the event on today’s episode of Good Morning Britain, host Kate Garraway explained: “I was there too and [Charles] went for a namastase instead, very sweet.”

Brits have been advised to avoid shaking hands where possible. GP Dr Rosemary Leonard, speaking on BBC Breakfast, said: “When we all walked into the BBC this morning, the charming people at the desk were all shaking our hands. I know it’s very British and very polite, we probably ought to stop shaking hands.”

"We probably ought to stop shaking hands."@DrRosemaryL – GP Rosemary Leonard explains on #BBCBreakfast one of the key ways we can reduce the spread of #coronavirus
More here: https://t.co/vk3hPahB9t pic.twitter.com/VMQqXJVmrN

It follows reports earlier this month that the Queen opted to wear gloves as she shook hands with people at Buckingham Palace.

He went for a namastase instead, very sweet.

During an investiture ceremony, the monarch wore long white gloves for the first time in more than a decade.

But a spokesperson for the palace said: “It is not unusual for the Queen to wear gloves on a public engagement.”

Similarly, when Her Majesty met Sri Lankan High Commissioner Saroja Sirisena and her husband, Dr Sudath Talpahewa, earlier this week, she did not offer her them handshakes.

But according to the Evening Standard, the Queen has returned to using her traditional greeting, as she shook hands with Prof. Mark Compton, Lord Prior of the Order of St John, on Wednesday without gloves.

Earlier this week, presenter Piers Morgan called for Britons to put the health of our elderly and more vulnerable ahead of the need to have a good time at large events where the spread of coronavirus is likely.

During a discussion about the Cheltenham Festival – and the fact it hasn’t been cancelled – on Wednesday’s episode of GMB, Piers said that while he understands the allure of having a “good old jolly” at the races, the health of elderly people and those with underlying conditions “should be more important”.