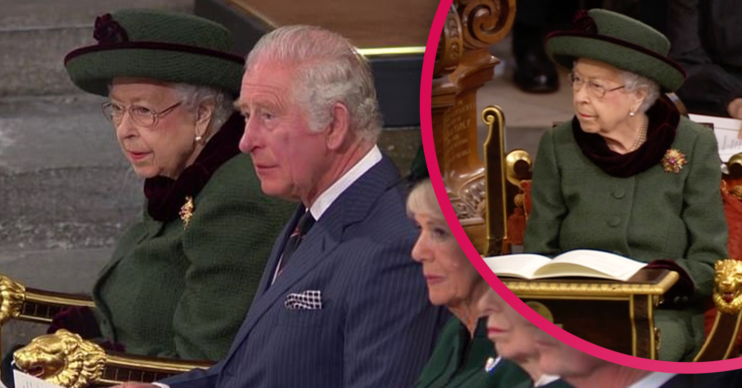 There was also a sweet nod during the service

Members of the royal family arrived at Westminster Abbey in the capital to pay tribute to the Duke of Edinburgh.

He died last year at the age of 99 years old.

The Queen wore a green dress coat and hat for the service, arriving on the arm of shamed son Prince Andrew.

And her choice of outfit for today of course had special meaning.

The Queen wore a green coat dress and matching hat for the service. Underneath her coat, a glimpse of a deep red dress was just visible.

It’s reported that the outfit was chosen with her beloved late husband in mind.

The Telegraph reported that attendees had been told to wear “lounge suits and day dresses” for the memorial service for Prince Philip.

This is to reflect his “understated and modest” style.

However, it’s also been claimed that guests were asked to wear green in recognition of Philip’s work for the climate and environment.

As as result, it’s thought this is why the Queen opted for her green coat dress.

The Duchess of Cornwall and Princess Anne also wore green for the service.

The Queen arrived at the memorial service for Prince Philip with her son Prince Andrew.

They travelled together from Windsor – a decision that left royal watchers divided.

As a result of her mobility issues, Andrew escorted his elderly mother into Westminster Abbey.

The pair were seen walking arm-in-arm, as the Queen clutched her walking stick.

Andrew escorted Her Majesty to her chair before taking his own seat.

The Queen is said to have had a hand in planning today’s memorial service for her husband.

A more uplifting affair than his funeral, the Queen reportedly asked for a particularly personal touch to be included today.

As a result, she opted to feature the flowers she and Philip had on their wedding day – white orchids – in the service.

The day’s flowers were in in shades of red, white and blue, reflecting the Union Jack flag.

And arrangements in the Abbey included the orchids, which featured in her wedding bouquet in 1947.

So what did you think of the service? Pay your condolences on our Facebook page @EntertainmentDailyFix.