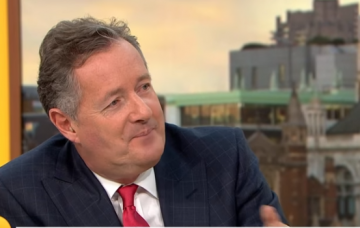 Does the GMB host think he's in charge of hiring and firing?

Piers Morgan is keen on swapping Good Morning Britain co-host Susanna Reid for Meghan Markle after discovering Prince Harry’s fiancée once believed she was destined for a career in breakfast telly.

Presenter Piers, 53, joked he’d remember his colleague fondly if former Suits actress Meghan followed her dream plans and moved across the pond to London to work in broadcasting.

Commenting on quotes from an old magazine interview conducted before Meghan met Harry, Piers noted she had fulfilled a vow to quit America and move to the UK if Donald Trump became President.

He wrote in his Mail on Sunday magazine column: “But it’s what she intended to do once she got here that grabbed my attention.

“She said, ‘I love acting, but there’s a part of me that would love some journalistic work. Maybe that’s the plan – move to London and get a job in breakfast television’.”

Ever the charmer, Piers quipped: “Wow. This could be a game-changer. Though, I’ll really miss Susanna.”

Less than two weeks ago Piers declared himself “bored” with Meghan and Harry’s forthcoming nuptials, despite his apparent enthusiasm to recruit her for GMB.

He tweeted: “At the risk of being taken straight to the Tower Of London for summary beheading… I’m already bored by the royal wedding & there’s still a month to go.”

Many of his “bored” followers agreed – although some did speculate whether Piers’ whinging had anything to do with him not being invited to the wedding.

The former newspaper editor has previously joked he was “heartbroken” he hadn’t been invited to the wedding, after striking up a friendship with Meghan last year.

He has often spoken about how he and Meghan began chatting over Twitter before she met Harry, and Piers has said Meghan used to send him preview episodes of her US TV show Suits.