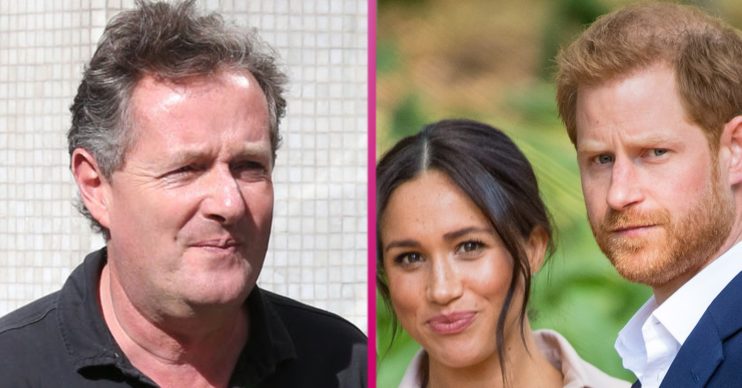 There he goes again!

Piers Morgan has come under fire after he accused Meghan Markle and Prince Harry of ‘brazen hypocrisy.’

The GMB host, 55, took to his Daily Mail column to share his annoyance at the Sussexes’ recent pregnancy news.

Here the star accuses them of being hypocrites for announcing that Meghan is expecting their second pregnancy via Press Association.

And for using their friend, trendy celeb photographer and activist, Misan Harriman, to photograph their happy update.

Why is Piers Morgan angry at Meghan Markle now?

He is particularly annoyed considering the former senior royals have repeatedly requested privacy from the press.

Piers writes: “For this is yet another example of Meghan and Harry’s brazen hypocrisy, and further evidence that they don’t have any real desire for privacy.

“They just want the right to use the media to promote themselves when it suits them, and trash and ban them when it doesn’t.

“In fact, it’s quite clear that the pair of them crave attention and publicity like ravenous jackals gorging on the carcass of a freshly slain gazelle.”

What’s more, The Good Morning Britain presenter further expressed his disapproval through a flurry of tweets.

However, this hasn’t gone down well with many on Twitter.

In fact, dozens have hit out at Piers and some are even begging for him to leave the Sussexes alone.

One disgruntled Twitter user ranted at Piers: “She/ they have every right to control which parts of their life they would like private. This sort of bullying is uncalled for. This is just stirring hatred. Shame on you.”

The user tweeted: “Imagine bullying a couple that have just announced the happy news they are pregnant after suffering a miscarriage. The strangest behaviour.”

And a third user argued: “Seriously mate. Get over it. The fact that you can display so much hatred towards them for sharing such a happy moment is quite disturbing. You need help.”

Harry and Meghan’s representative confirmed: “We can confirm that Archie is going to be a big brother.

Meanwhile the Palace has said that the Queen, Prince Philip, Prince Charles and entire Royal Family are all delighted with the news.