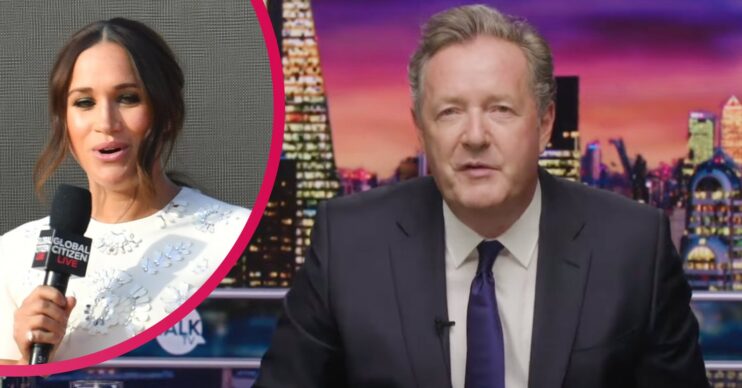 He described it as being “beyond parody” in a tweet to his 7.9 million followers last night.

In January, Meghan and Prince Harry urged Spotify to “make changes”. They asked the streaming site to do this to prevent “serious harm” from COVID misinformation.

It was announced yesterday that Meghan’s production firm, Archewell, was satisfied that Spotify had addressed the misinformation problem.

It was also announced that Meghan was finally going to be recording her Spotify podcast. The podcast will debut on the platform in the summer.

It will be almost two years since Meghan and Harry signed a $25m deal with the platform. In that time, they have appeared in one podcast together.

News of Meghan and Harry’s announcement eventually reached Piers, and he had a lot to say.

Upon hearing the news, Piers took to Twitter to mock the Duchess of Sussex.

“So a proven liar is now satisfied nobody else is lying? Beyond parody,” Piers wrote in reply to the story that they were satisfied Spotify had tackled misinformation.

He also added three laughing emojis to his tweet.

This morning (Friday, March 18), Piers quote-tweeted another tweet, this one announcing that Meghan would finally be recording her podcast.

Some of Piers’ followers were firmly on Meghan and Harry’s side.

“Just leave them alone,” one of his followers said.

“Again…where is the line past which it becomes harassment? You don’t like the woman, you don’t believe her, fine, move on,” another tweeted.

“Do move on. The sound of barrel-scraping is so unattractive,” a third wrote.

“You’re beyond obsessed with Meghan. It’s not healthy, mate,” another said.

However, some of Piers’ followers agreed with him.

“Watch out Megan and Harry…Piers is back yipheeeeeee. Go go Piers,” one of his followers tweeted.

“This is so spot on Piers,” another said.

“She’s in the right place, as far from the uk as possible,” a third wrote.