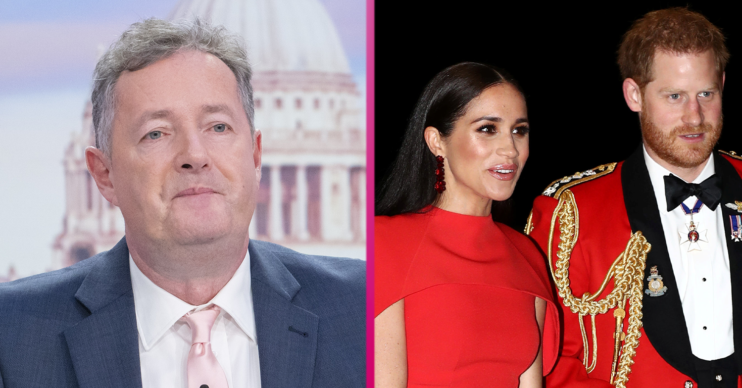 The GMB host slams the royal couple as 'narcissistic' and 'deluded'

Piers Morgan has hit out at Meghan Markle and Prince Harry over the upcoming book Finding Freedom.

Taking to his newspaper column, Piers says the claims made in the book pale in comparison to real world problems.

He argues that as thousands of Brits struggle in lockdown, they will likely have little sympathy for “whiny” Harry and Meghan.

Piers Morgan hits out at Meghan and Harry

Venting in his Daily Mail column, an exasperated Piers writes: “Yet the more they complain, as the rest of the world struggles with the very real hell of the worst pandemic for 100 years, the more they expose themselves as a pair of appallingly bitter, staggeringly self-obsessed, utterly deluded, and woefully tone-deaf laughing stocks.”

He adds that the book, written by journalists Omid Scobie and Carolyn Durand, likely drew inspiration for its title from Nelson Mandela. His 1994 autobiography is called The Long Walk to Freedom.

He brands this “a sick joke” and laments that Nelson Mandela suffered far greater than Harry or Meghan ever had.

“But any comparison between Mandela and the Sussexes is frankly a sick joke.

“For 18 of his 27 years behind bars, South Africa’s most iconic leader was housed in an 8ft-by-7ft concrete cell on Robben Island with only a straw mat to sleep on.”

The journalist and former newspaper editor promoted his article over on Twitter.

He tweeted: “Meghan & Harry’s new book only confirms they’re the world’s most tone-deaf, hypocritical, narcissistic, deluded, whiny brats – AND that most of the stories the ‘lying’ press wrote about them were 100 percent true!”

His rant against the royals’ controversial new book comes in the wake of an apparent truce regarding Meghan.

Piers had repeatedly shared his disdain for the former Suits actress on GMB and in his columns.

Piers Morgan: “I’ve not been the Duchess of Sussex’s biggest fan”

He even claims she ‘ghosted’ him after they met for drinks in a London pub. He alleges their meeting occurred just as she was beginning to date Prince Harry.

However, he did a u-turn back in June when he praised Meghan’s handling of George Floyd’s death.

He praised her graduation speech to her former high school, and even said President Donald Trump should follow suit.

He wrote: “It comes to something when it falls to Meghan Markle to give the President a lesson in how to show leadership at a time like this.

“I’ve not been the Duchess of Sussex’s biggest fan, to put it mildly, but I actually thought she hit the perfect tone in her comments about George Floyd today, telling students in a video message about her own painful memories of witnessing the 1992 riots in Los Angeles after the brutal beating of Rodney King, and quoting her old teacher Ms Pollia who would tell her: ‘Always remember to put others’ needs above your own fears’.”