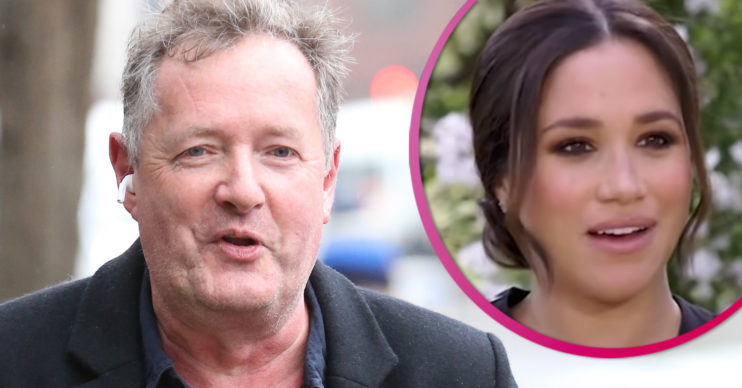 The former Good Morning Britain host, 55, responded to a new claim that the Duke and Duchess of Sussex have now filed an Ofcom complaint against him.

Journalist Archie Bland tweeted: “Meanwhile, am told the Duke and Duchess of Sussex have now followed their complaint to ITV over Good Morning Britain with a complaint to Ofcom.”

However, Piers boldly responded by asking where he could complain with regards to The Queen and how her mental health may be affected by Harry and Meghan’s Oprah interview.

What did Piers Morgan say about Meghan Markle?

Piers tweeted: “Where do I get to complain about all the shameful lies/smears in their interview & the terrible damage they’ve done to the Queen’s mental health as her 99-yr-old husband spends his fourth week in hospital?”

As divisive as ever, his response gained both support and apparent disgust.

One Twitter user vented: “Constantly trashing someone on live TV where they felt they received racism and no support for their mental health was never going to go down well with the public!”

Another user argued: “If someone was [bleep] you every morning on live TV for months don’t you think you would make a complaint to Ofcom as well??

“No doubt because you couldn’t take 5 minutes of it the morning you walked off.”

Whereas another appeared to defend the former newspaper editor with: “This is just outrageous. This couple are deluded and to be doing this during a global pandemic beggars belief. Piers you are a legend. Don’t change.”

In fact, Piers’ latest Twitter spat comes just days after he resigned from his GMB role.

He infamously walked off the set of his own show when he was confronted by Alex Beresford.

What happened between Piers Morgan and Alex Beresford?

The ITV weatherman said he was tired of Piers constantly bashing Meghan Markle.

But a furious Piers stormed off, and upon his return accused Alex of verbally attacking him.

Read more: Piers Morgan says he lost his job over refusing to apologise

Meanwhile, over 40,000 people complained to Ofcom about Piers’ comments about Meghan.

Since then Piers has declared he will “re-emerge” and reports claim he’s been inundated with new job offers.

Meanwhile his son, Spencer, just tweeted his support for his old man.

Spencer tweeted: “Wow. Just went on one of them lame COVID walks with @piersmorgan.

“The level of public support on the street was actually mind blowing. The social media bubble is fake. Team Piers is real. And it’s huge.”