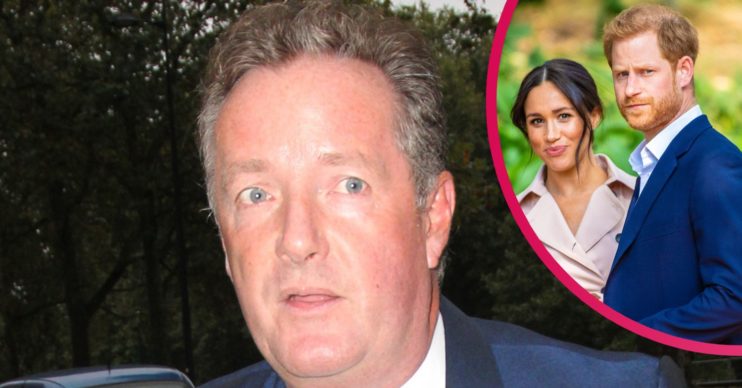 The GMB host hit out at the couple once again

Piers Morgan has been ridiculed by fans after taking aim at Prince Harry and Meghan Markle.

The Good Morning Britain presenter, 55, slammed the former royal couple while praising the Duke and Duchess of Cambridge on Instagram yesterday (December 7).

Alongside a shot of Prince William and his wife Kate, Piers gushed over the pair as they embarked on their three-day tour of Scotland, England, and Wales.

The controversial host penned: “Great photo. As the Sussexes do their vain-glorious celebrity [bleep] thing in California, the Cambridges quietly go up and down the UK on a train, paying tribute to our pandemic heroes.

“My admiration for these two has grown hugely this year. @kensingtonroyal.”

The dig didn’t sit well with followers, who claimed Piers was “obsessed” with the married pair.

Taking to the comments, one wrote: “He is obsessed with them!”

Another said: “Ahh c’mon you could have left Harry and Meghan out of this.”

A third added: “So what?! If that’s what they want to do let them?! We’re all grateful for the NHS and key workers (I’m a key worker myself). We don’t all need to shout it from the rooftops and neither do Harry and Meghan just because they’re of public interest.”

A fourth stated: “Think you so need to get over yourself.”

While a fifth commented: “Piers that’s not fair!”

Piers’ past issues with Prince Harry and Meghan Markle

His scathing post comes hours after the GMB host decided to hit out at the Duke and Duchess of Sussex amid reports they are launching their own awards.

Writing for the Daily Mail, Piers fumed: “Meghan and Harry haven’t announced the title of their soon-to-be-coveted honors yet, so in the interim, I will dub them the ‘Wokies’ in recognition of their ultra-woke view of the world.

“And it doesn’t take a genius to work out who the winners of the ‘Wokies’ will be – it will be people like the Sussexes themselves who in their own minds are the living, breathing personification of perfect personal virtue, unimpeachable moral probity and consistent ethical purity, even if they often practice the complete opposite of what they preach.”

Meanwhile, last month Piers criticised the couple as he called their visit to the Los Angeles National Cemetery on Remembrance Sunday a “publicity stunt”.

Read more: Piers Morgan in hysterics over Pete and Sophie Sandiford’s comments about him on Gogglebox

What does Piers think of his critics?

Piers previously hit out at claims he was “obsessed” with Meghan.

Speaking to The Express, he said: “I think along with Donald Trump, Brexit and coronavirus, the Sussexes have made themselves one of the biggest news stories in the last three years, and they don’t want to be left alone.

“So I don’t really understand the criticism; I’m a columnist, I’m on TV every morning, I’m on Twitter all the time.

“Obviously they are the fourth biggest story of the past three years so obviously I’m going to be commenting about it.”