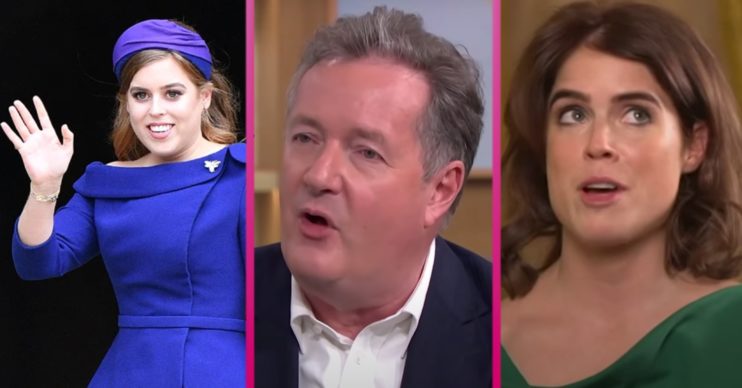 Royals reject offer of advice, according to Piers himself

Piers Morgan was recently “snubbed” by Princesses Beatrice and Eugenie in the latest news concerning his experiences with members of the royal family.

According to Piers himself, the Duke of York’s daughters gave his offers of advice the widest berth after bumping into him.

However, despite Beatrice and Eugenie’s reaction, it seems Piers is quite fond of the Queen’s granddaughters.

What happened between Piers and the princesses?

In his latest column for the Mail on Sunday, Piers wrote about a party he attended nearly a fortnight ago.

He explained the bash in West London was the first time he’d been to a party since March 2020.

The former GMB host also recalled schmoozing with Yasmin Le Bon, Simon Le Bon and Joan Collins at the do.

However, it was his interaction with Beatrice and Eugenie that added the regal cherry on top of his anecdotes.

Piers Morgan news: So what did he say?

Piers explained how he asked pregnant Princess Beatrice to thanks her mum Fergie for her recent texts of support to him.

He also noted how he has always had a “soft spot” for her mum – and that Fergie has showed him “loyalty”.

The ex newspaper editor noted to the two royals he is a dad of four and so is an “expert” on raising a family.

However, it appears Beatrice and Eugenie decided to pass – with Piers describing their reaction as involving their eyebrows shooting up “in synchronised horror”.

Read more: Piers Morgan warns Meghan Markle she hasn’t ‘won battle’ and is in for a ‘big shock’

He also noted their rejection came as a “firm, unified response”.

Nonetheless, it seems the snub has not changed Piers opinion of either of them.

But Piers could not let the opportunity pass to get a dig in on his less-favoured royals.

He wrote: “I’ve known both princesses since they were very young, and they’ve been through a lot of tough times in the media spotlight, especially lately over their father Prince Andrew’s shameful friendship with Jeffrey Epstein.

“But they never complain, or give whining interviews, or publicly trash their family, and they’re always incredibly nice, polite and good fun. [That all] makes such a refreshing change from their narcissistic, self-pitying, family-abusing, spoiled-brat cousins over in California.”