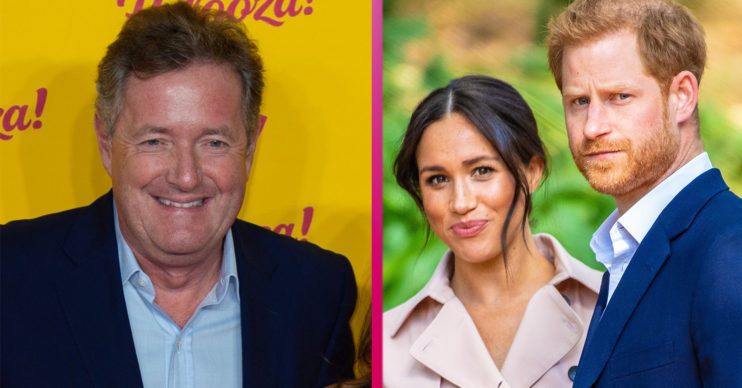 He accused them of hypocrisy (again)

Piers Morgan has taken another dig at Prince Harry and Meghan Markle.

It comes in the wake of news that the exiled royal couple have signed a ‘mega-deal’ with streaming service Netflix to produce films and TV series.

What did Piers Morgan say about Harry and Meghan?

GMB host Piers, 55, is never shy at offering his opinions when it comes to the couple, who stepped down from royal duties in March.

Yesterday (Wednesday September 2), they announced that they signed a multi-year deal with Netflix with their as yet untitled production company.

And it didn’t take long for Piers to respond.

From to people who’ve ditched their entire families…

Taking to Twitter, the presenter quoted-tweeted a story in People magazine, which mentioned that the pair will promise ‘inspirational family programming’.

It wasn’t long before many of his followers responded.

“I have been a lifetime supporter of the British Royal Family,” another fumed.

“If the Markles are not stripped of their royal titles, I am going to become an ardent supporter of dethroning them all.

“Even though I think other royal members have made a valiant effort at being decent human beings.”

But it wasn’t all anger.

One follower came out in support of Meghan.

“Because the right-wing press here vilified Meghan Markle from day one – they didn’t like the fact that she is mixed race and an independent, successful woman.

“There’s only so much anyone can take. If they didn’t move away their marriage would have broken down.”

What did the couple say?

In a statement released yesterday, Harry and Meghan – now living in the US – said: “Our lives, both independent of each other and as a couple…

“…have allowed us to understand the power of the human spirit: of courage, resilience, and the need for connection.

“Through our work with diverse communities and their environments…

“…to shining a light on people and causes around the world, our focus will be on creating content that informs but also gives hope.

“As new parents, making inspirational family programming is also important to us…

“…as is powerful storytelling through a truthful and relatable lens.”

A spokesperson for Netflix said that it was “incredibly proud” to be working with the couple.