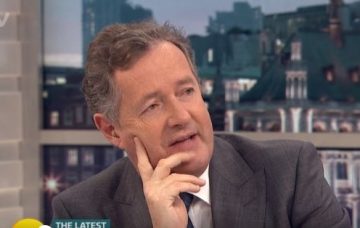 Fans have asked if it's because Piers didn't get an invite!

Piers Morgan has joked he’s at risk of being sent to the Tower of London after making a divisive comment about Prince Harry and Meghan Markle’s upcoming wedding.

The Good Morning Britain presenter took to Twitter on Thursday morning to make a bold claim about the royal wedding: he’s over it!

Piers, 53, said: “At the risk of being taken straight to the Tower Of London for summary beheading… I’m already bored by the royal wedding & there’s still a month to go.”

Well, fans had plenty to say about that!

Many of Piers’ followers actually agreed with him, admitting they’re also a bit “bored” of the constant speculation about Harry and Meghan’s big day.

Some even joked it was the first time they’d ever agreed with Piers on anything! 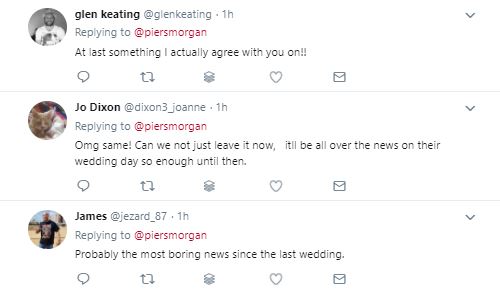 Some, meanwhile, jokingly asked Piers if his boredom was more to do with the fact he hasn’t been invited. Ooh…

Well, he had pleaded previously for an invite…

Piers previously joked he was “heartbroken” he hadn’t been invited to the wedding, after striking up a friendship with Meghan last year.

He has often spoken about how he and Meghan began chatting over Twitter before she met Harry, and Piers has said Meghan used to send him preview episodes of her US TV show Suits.

In March, he said on GMB: “I followed her along with three other stars of Suits on Twitter and within five minutes she had replied saying, ‘Oh my God, I’m a huge fan, thank you for the follow!’

“That is how it started. That’s why I feel so heartbroken that Meghan has ditched me so callously. No more pub visits. I’m literally around the corner. I mean, she could pop down. We could put it right. I could get a front seat at the wedding.

“I could be that guy when they say, ‘Does anyone object?’ ‘I do! I thought I was that guy!’ My wife wouldn’t like it very much if I did, but you know…”

Meanwhile, many other followers told Piers they were really looking forward to watching Harry and Meghan marry.

They’ll tie the knot at St. George’s Chapel at Windsor Castle on Saturday, May 19.

Harry and Meghan will marry at midday on May 19, before undertaking a carriage procession through the streets of Windsor.

A luncheon hosted by The Queen will follow, before a private evening reception thrown by Prince Charles.

Many details about the wedding are still under wraps, including the identity of the best man and bridesmaids and, of course, what wedding dress Meghan will wear!

We’re also not sure just who has been invited, although Kensington Palace has confirmed no world political leaders will make the cut, ruling out President Donald Trump and Prime Minister Theresa May.

The couple have released a few details so far, confirming they’ll have a lemon and elderflower wedding cake from London-based bakery, Violet Cakes, and the ceremony and reception will be decorated by florist Philippa Craddock.

Their wedding photographer is Alexi Lubomirski, a former assistant to Mario Testino, while Harry and Meghan have asked for donations to seven chosen charities in lieu of wedding gifts.