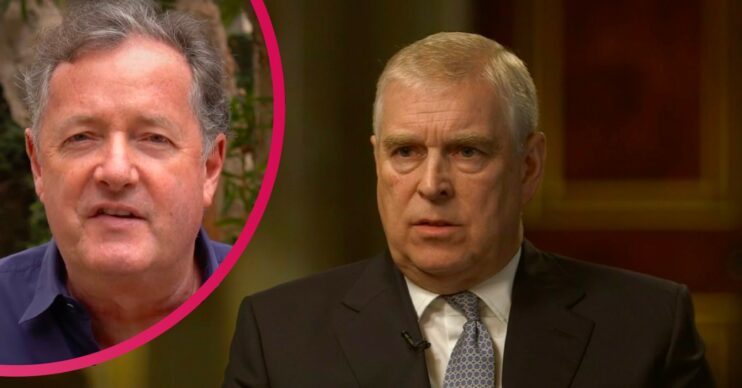 Piers‘ criticism came just hours after it emerged that Prince Andrew had come to an out-of-court financial settlement with Virginia Giuffre – the woman accusing him of sexual assault.

News broke yesterday that Andrew had agreed to a settlement with Virginia Giuffre. This means that he won’t be appearing in court later this year in the US.

Virginia Giuffre accused the Duke of York of sexually assaulting her when she was 17.

Andrew always denied the allegations Giuffre made against him.

However, it emerged yesterday that Andrew, 61, had reached an out-of-court settlement with Giuffre.

Additionally, the Duke of York also said he regretted his association with Jeffrey Epstein.

What has Piers Morgan said about Prince Andrew?

In his column for The Sun, Piers brutally slammed the Duke of York, branding him a “coward”.

“By paying a massive cheque to avoid a showdown in court, he’s confirmed himself to be a snivelling little coward whose denials and demands weren’t worth the paper they were written on,” Piers wrote.

Piers then slammed Prince Andrew for expressing his regret over associating with Jeffrey Epstein.

“The very last person any victim of evil sex trafficking needs support from is a man who hung out for years with two evil sex traffickers and who just paid vast sums of money to avoid facing a trial over his own alleged involvement and participation,” Piers wrote.

What else did Piers Morgan say about Prince Andrew?

Piers then said it’s obvious why Andrew came to a settlement with Giuffre, as he was set to be questioned by David Boies, a well known lawyer who has held the likes of Bill Gates to account.

Piers believes that Boies was going to eat Andrew alive, given the chance. He said Andrew’s Newsnight interview had been bad enough for the Prince.

Andrew was also slammed for the fact that this has all happened during the Queen‘s Platinum Jubilee year.

Read more: Prince Charles ‘banishes Prince Andrew from Windsor as he wants brother out of sight’

“The prospect of Her Majesty being dragged into this repulsive sewer at the age of 95, with all the salacious global headlines that would have inevitably ensued, was an outrageous, totally unacceptable situation which could have inflicted terminal damage on the Monarchy,” Piers said.

Piers then said that “finished” Andrew should have all remaining titles and privileges removed.

He said that there should be no way back now for the Queen’s third child.