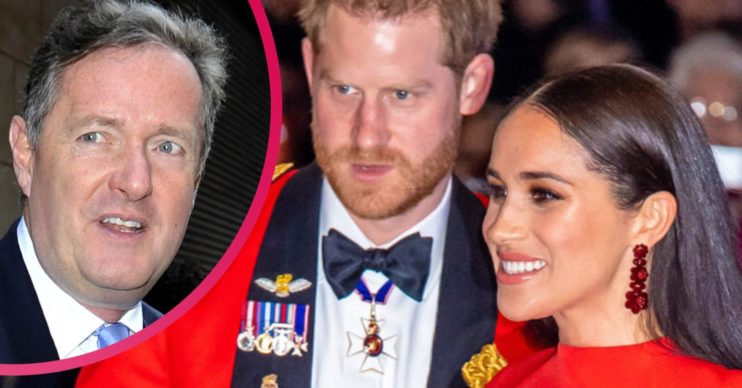 He believes couple 'should stop trading off their royal titles'

The TV host believes they have stepped out of line after Meghan made a dig at the US President.

Protocol usually dictates that royals stay out of politics.

But following an appearance at a When All Women Vote event, Piers believes Meghan has gone too far.

What did Piers say about Meghan and Harry?

The Duchess of Sussex was a guest at the virtual political rally organised by Michelle Obama on Thursday (August 20).

She warned about the upcoming Presidential election: “We all know what’s at stake.”

The Queen must strip the Sussexes of their titles.

Meghan also called on women to make their voices heard and exercise their vote in November.

She told onlookers: “We vote to honour those who came before us and to protect those that come after us… that’s what community is all about and that’s specifically what this election is all about.

“We all know what’s at stake this year. I know it, I think all of you certainly know it if you are here at this fun event with us.

“You’re just as mobilised and energised to see the change we all need and deserve. This fight is worth fighting and we all need to be out there mobilising to have our voices heard.

But her remarks have left Piers furious – and he hopes the Queen steps in.

He tweeted last night (Friday, August 21) that the couple should keep their opinions to themselves.

Piers wrote: “The Queen must strip the Sussexes of their titles.

“They can’t remain as royals and spout off about foreign elections in such a brazenly partisan way.”

Last time I checked she’s still calling herself the Duchess of Sussex. https://t.co/LggJ9vKbQ1

He continued: “Last time I checked she’s still calling herself the Duchess of Sussex.”

He insisted: “She can do what she likes, she just can’t make politically partisan statements while remaining Duchess of Sussex.

“The royals are not allowed to do that. If Meghan and Harry truly want ‘freedom’ from royal duty and rules, they should stop trading off their royal titles.”