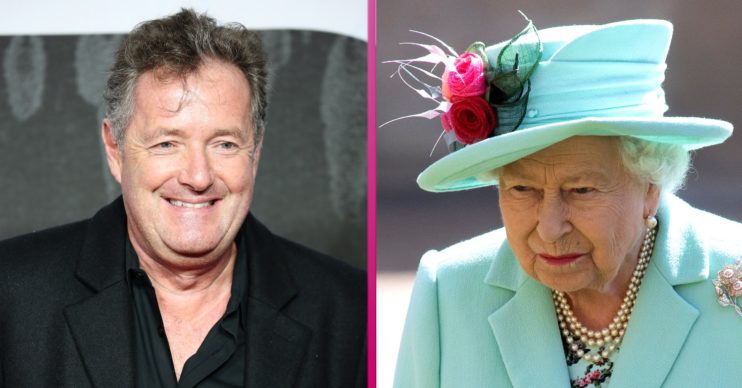 Piers Morgan has the upmost respect for the monarch

Piers Morgan has vehemently defended the Queen after a journalist mocked the royal on social media.

The Good Morning Britain presenter, 55, is a staunch royalist and fan of the monarch, 94.

What did Piers Morgan say about the Queen?

He was none too pleased when an American journalist jokingly referred to Queen Elizabeth II as an ‘old broad’.

David Simon, a journalist and scriptwriter, lashed out at Piers over a series of tweets.

He appeared enraged after Piers demanded that Meghan Markle and Prince Harry should be stripped of their titles.

David firstly tweeted: “How about we strip you of your media platform and give it someone, anyone who has a solid [bleeping] take on anything that matters in these life and times.”

This was then followed up with: “Tell the old broad to do what she feels. Playing hard with these two has worked wonders for the Royal Family so far.”

The ‘old broad’ is Her Majesty The Queen, you disrespectful little twerp.

This clearly hit a nerve with Piers, who replied with full force.

The GMB host replied: “The ‘old broad’ is Her Majesty The Queen, you disrespectful little twerp.

“She’s been on the throne, serving the British people with dutiful dignity, class and empathy, for longer than you’ve been alive.

“So stick your impertinent Baltimore braggadocio where the sun don’t shine.”

Piers had originally said that the Queen should take away Harry and Meghan’s titles of Duke and Duchess.

Why is Piers Morgan so angry with Meghan Markle and Prince Harry?

He was left irked after Meghan shared her political stance and urged Americans to vote.

Traditionally, royals are supposed to remain neutral when it comes to both national and international politics.

Piers tweeted on Friday: “The Queen must strip the Sussexes of their titles. They can’t remain as royals and spout off about foreign elections in such a brazenly partisan way.”

He later clarified his point on the same platform with: “Meghan and Harry can do and say what they like, they just can’t be politically partisan and remain the Duke & Duchess of Sussex.

“The royals have to be publicly non-partisan. That’s the deal.”

He went on to call David ‘silly’ after he berated Piers with a series of expletives.

Piers shared: “Pipe down you silly man. If Ms Markle wants to make a real moral stand, I suggest she gives up her Duchess title, and her father-in-law’s money, and stands on her own two feet.

“Her shocking disrespect for the Queen and the Monarchy, and the royal ‘rule book’, is outrageous.”