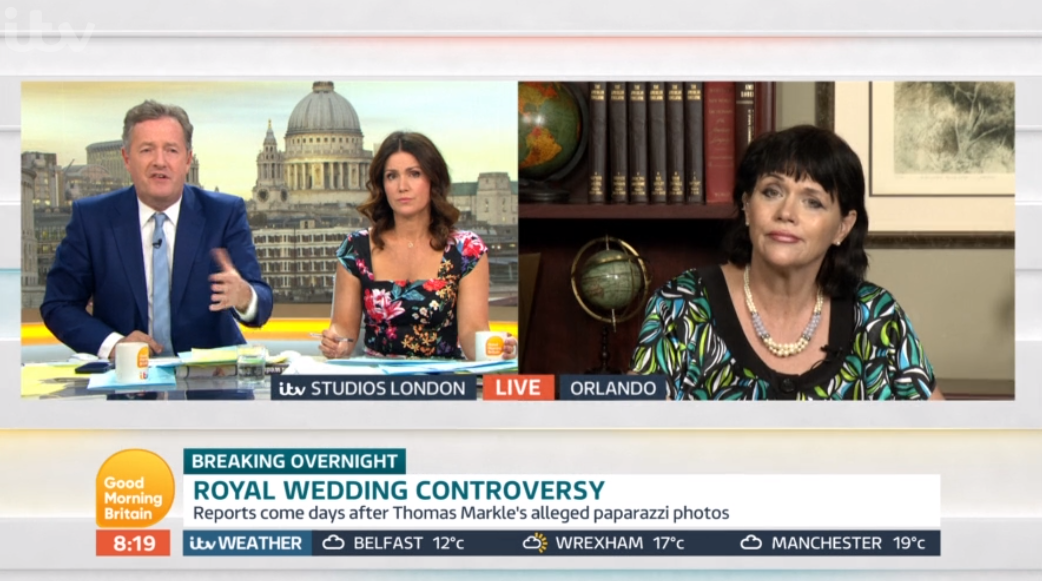 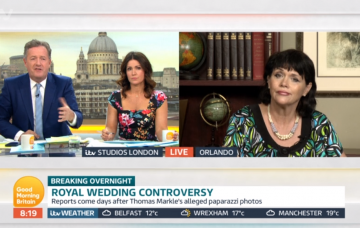 Piers Morgan has lashed out at Meghan Markle’s half-sister Samantha Markle, calling her a “little vulture.”

But during the explosive exchange, Piers slammed Samantha, after she accused the media of “twisting” anything she has told them about Meghan.

Samantha told Piers and Susanna Reid that her father is “quite depressed” over “a series of events involving the media.”

Piers asked Samantha: “When you say a series of events involving the media, you mean that he took money from a photographer to stage pictures that were then sold around the world, right?”

Samantha hit back: “I think it’s wrong to say that. That was coincidental. The motive, the goal of it was he has been so unfairly presented in the media as being shabby and rubbishy…”

Piers interrupted. “You don’t like the shabby way he’s been portrayed by the media, right? You, some might argue, have spent the last two years saying shabby things about Meghan Markle.”

The presenter then listed off several claims Samantha has made of her sister, including describing Meghan as “selfish” and “narcissistic.”

Piers asked: “How much money have you made from trashing Meghan Markle?”

Samantha replied: “Not very much. Many publications twist those stories.”

Piers continued: “You say this is all the media’s fault that he is now not coming to the wedding because of this, because the media has been treating him in a shabby way.

“Many of our viewers may have watched your activities in the last year and a half and think you have maybe treated your sister in a shabby way. That may, of course, be why you’re not invited to the wedding. There’s a certain hypocrisy here.”

But Samantha argued: “I think my father has really suffered at the hands of the media. They’ve presented him in the most horrible and inaccurate ways.”

Samantha then branded the media “vultures” and said her words had been twisted and embellished.

“There’s no bigger media vulture with this wedding than you. Is there, Ms Markle?,” Piers cut in. “How you have the gall to come on here and talk about media vultures! You are doing a book called the ‘Diary of Princess Pushy’s Sister.'”

“You’ve been trashing her for two years, you little vulture,” he added.

“I’m sure Piers, your inquiring minds would like to know why the title was that,” Samantha said. “You can’t judge a book by its cover or by its title. The title was a mockery of social labels.

“I wanted a title with opposite content. For intelligent minds. I thought people would understand that, but people just want to look at the negatives. It was assumed it was a negative, slamming tell-all. It was not negative or slamming, but still nobody wanted to hear it was positive.”

“It seems to me that her father, your father, has let her down,” Piers said.

“Doing a deal with the paparazzi knowing that they’d [Prince Harry and Meghan] be horrified.”

On Monday, Samantha appeared on ITV’s Loose Women and admitted she had been the one to suggest her father co-operate with a photographer to show himself and the royal family in a positive light.

He was photographed being measured for a suit and looking up pictures of Harry and Meghan at an internet cafe near his Mexico home.

Meanwhile, there is much speculation that Thomas will now not be attending his daughter’s wedding after he told US website TMZ he would not travel to the UK.

It’s been reported he fears embarrassing Meghan and the royal family even further.

Kensington Palace released a statement on Tuesday, saying: “This is a deeply personal moment for Ms Markle in the days before her wedding.