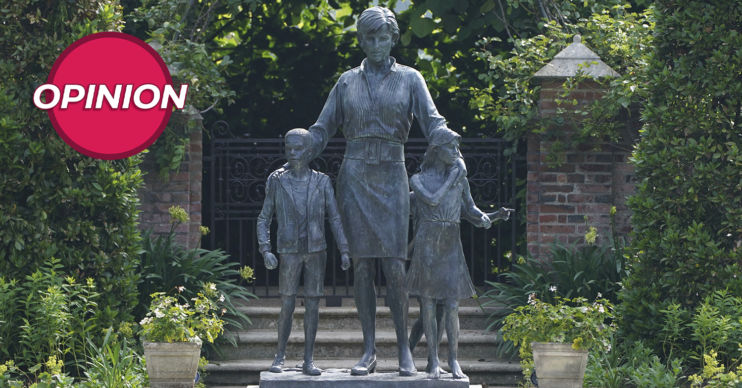 OPINION: Why the Princess Diana statue is ‘truly Rank(-Broadley)’

When we think of the late great Princess Diana we are reminded of her enigmatic warm smile, her delicate beauty and her impeccable style – but the statue that was unveiled this week to mark what would have been her 60th birthday has tragically captured none of these appealing qualities.

Okay, reproducing somebody’s likeness in sculpture is a hard feat. You are rarely ever going to replicate the delicate frame of a face as you would see it in real life.

But there is so much wrong with this highly anticipated work by artist Ian Rank-Broadley that it’s hard to fully embrace and truly celebrate the memory of one of the most beloved women in the world.

So what’s wrong with the Princess Diana statue?

For one, Princess Diana has been crafted into a stiff, upright Messiah-like standing position that doesn’t reflect her soft, floaty nature.

She looks more like a saucy secretary than a do-gooding icon.

Her face is angular and manly and fails to capture her coquettishness that the world fell in love with. Her outfit… a gaping blouse with a chunky belt and fitted skirt.

She looks more like a saucy secretary than a do-gooding icon.

Read more: William and Harry didn’t have heart-to-heart as Duke of Sussex left 20 minutes after unveiling

And then there’s the kids. Scattered around her are three little random nippers. Without context it is confusing. When did Diana have a daughter?

I thought she was just mum to Prince William and that little rascal Prince Harry?

It is only when you discover that the artist is trying to remind us that the she represents the “universality and generational impact of the princess’s work” that we kind of get what the sculpture is trying to say.

But it still leaves me cold.

Either have Diana alone in a more relaxed pose, reminding us of the warm human being she was. Or simply have her posing with her beloved sons.

But this woke fantasy sculpture reminds me of Michael Jackson singing Earth Song at the BRITs.

If only Ian had stuck to the picture he had been originally inspired by. The one Diana used for her Christmas cards after getting divorced from Prince Charles.

It sees a beautifully posed and gentle-looking Diana glancing lovingly down at William. Meanwhile, Harry stares adoringly up at her on her left.

It is such a beautifully composed iconic image that actually looks like the kind of historic portraits you see hanging up in the National Portrait Gallery.

He failed to capture the essence of Diana

Fair enough, it’s so easy to poke fun a bad likenesses of people. But what Rank-Broadley has failed to do is capture the true essence of Diana. Which is odd, as her sons William and Harry have been so closely involved in its progress.

Diana was a warm, compassionate woman, who smiled through the worst of times, and radiated joy to the world even when her private life was so dark and stormy.

This statue sadly fails to capture that admirably quality.

Devotees of the princess will no doubt embrace this fascinating exhibit as her devoted sons have been so closely involved with its development.

It also appears, from what we could see of their chilled-out interaction at the unveiling, to have reunited them after their recent falling out. Here’s hoping anyway!

But for those wanting to remember Diana as she really was, thank God we have our memories and hours and hours of old footage to relive time and time again.

What did you think of the statue? Leave us a comment on our Facebook page @EntertainmentDailyFix and let us know.