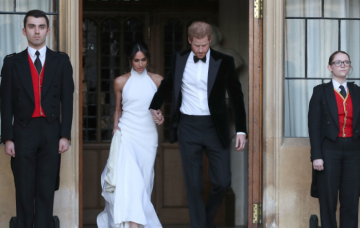 Newlyweds Harry and Meghan ‘planning visit’ to her dad

Thomas Markle is yet to meet his new son-in-law

Thomas Markle missed out on his daughter’s big day, but he won’t have to wait much longer to meet his new son-in-law, as Prince Harry and Meghan are planning a trip to see him soon, according to reports.

The newlyweds will arrange a get-together with Thomas following their honeymoon, sources told The Sun.

The new Duke and Duchess of Sussex will go on holiday later this week after joining celebrations for Prince Charles’ 70th birthday at Buckingham Palace on Tuesday.

A family source told The Sun: “Meghan and Thomas are both devastated he wasn’t able to attend the wedding and have discussed seeing each other soon.

“They have been speaking all week, mostly by text. She has been worried about him and checking how he is regularly.

“Thomas has told other family members he hopes and expects Meghan and Harry to come to see him.”

The former Hollywood lighting director told the gossip site TMZ that he watched the wedding at a friend’s house in California on Saturday, across the border from his own home in northern Mexico.

“My baby looks beautiful and she looks very happy,” he said.

The Telegraph reports that if Prince Harry and his new bride do travel to meet Thomas, it is likely to be in California rather than Mexico.

They state: “It is considered highly unlikely that the Duke and Duchess of Sussex would be able to visit him at home, 10 miles south of Tijuana.

“The area is currently experiencing a surge in violence as Mexican cartels wage war on each other, vying for control of the lucrative border trafficking routes.

“Tijuana was ranked the fifth most dangerous city in the world outside a war zone in 2017, and this year is on track to beat that record.”

Meanwhile, it has been reported by Us Weekly that Meghan was unable to speak to her dad on her actual wedding day.

Thomas had been due to give his daughter away but was unable to travel to the ceremony due to his health.

When the news was announced, Meghan released a statement via Kensington Palace which read: “Sadly, my father will not be attending our wedding.

“I have always cared for my father and hope he can be given the space he needs to focus on his health.”

Prince Charles stepped in to walk the former Suits actress down the aisle, and he later also gave a speech.

Meghan’s only close family at the service was her mother, Doria Ragland, who held back tears as she watched her daughter exchange vows with the prince.

Doria and Thomas separated when Meghan, now 36, was a child.

He has had children via other relationships who weren’t invited to the wedding but have frequently spoken out in the press about their half sister.

Meghan’s father sad he hopes they will now “shut up”.

He told TMZ he hopes the happy couple “can go on a nice honeymoon and rest and relax, and all of my relatives will just shut up about everything”.

Do you think Harry and Meghan should visit Thomas soon? Leave us a comment on our Facebook page @EntertainmentDailyFix and let us know what you think!