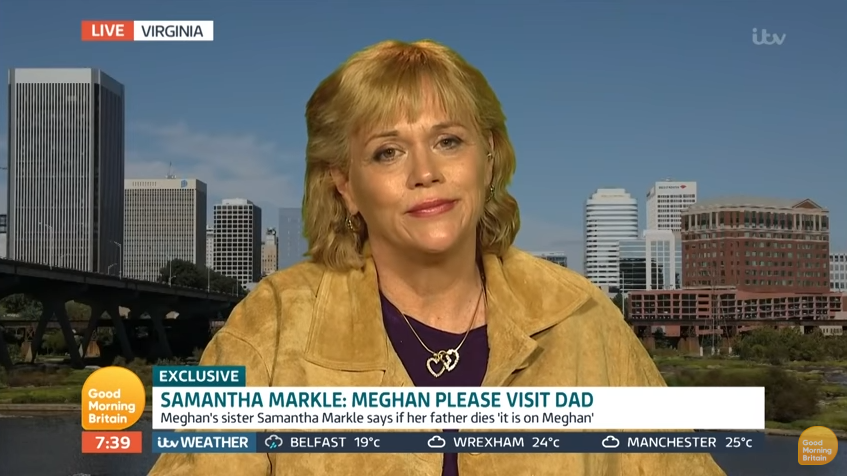 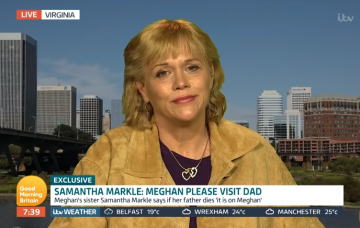 She's not worried about upsetting her half-sister!

Samantha Markle has added fuel to rumours she will be appearing on Celebrity Big Brother.

The half-sister of the Duchess of Sussex is reported to be entering the house for the Channel 5 reality show.

Asked about it on ITV’s Good Morning Britain she said: “I’ve worked in media most of my life, why would I not?

“Why would I stop living because I have a family issue going on?”

She continued: “The media make billions of dollars off social issues and talking about the royals. I don’t see how we’re any different. No one has a copyright on our life experiences.

“We are each individuals with our own life experience. With all due respect, it’s not just Meg, we’re entitled to share that, we’re entitled to be open about it, if we can shed some light on some issues for the public, then great.

“We can enjoy the process. I don’t think there’s anything wrong with that. It’s not disparaging, it’s not harmful.

“For someone to say, ‘Oh you shouldn’t take any money, you should turn down a pay cheque’, go tell your boss you don’t want a pay cheque for interviewing me because that’s cashing in.”

Questioned again about Celebrity Big Brother, she said: “I would tell you, but then I would have to kill you, so…. I don’t want to find myself in locks and stocks quite frankly. It wouldn’t be becoming.”

Responding to criticism that she is making money from her half-sister’s position, she said: “I have to say, first of all, people don’t know about me, I’ve worked in media most of my life and in broadcasting.

“So because my sister is suddenly royal isn’t grounds for me to stop doing all that.”

Exclusive: Samantha Markle, the half-sister of the Duchess of Sussex, is pleading with Meghan to speak to her father. They haven’t spoken for months over fears he’ll leak details of their conversation to the press. pic.twitter.com/yVcq4pmpu2

“Let’s face it, we all have to survive, money makes the world go round, so if you want to call that cashing in, that’s fine.

“But no one in the media would refuse a pay cheque for talking about the royals and as a family we’re not subject to royal protocol, certainly here in America.

“If you want to call it cashing in, I think that’s a little bit ridiculous.”

Do you think Samantha would be entertaining in the house? Leave us a comment on our Facebook page @EntertainmentDailyFix and let us know!