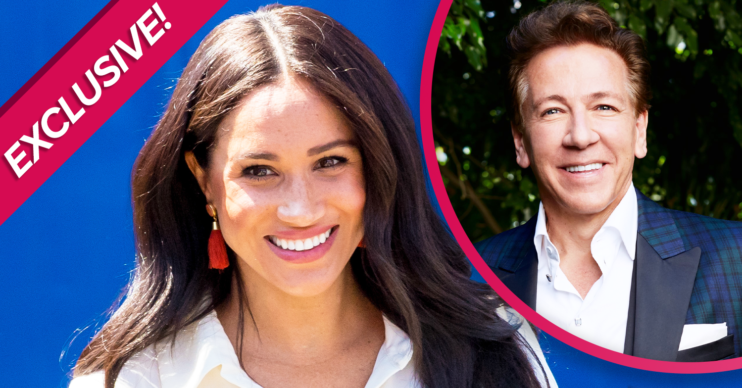 Speaking exclusively to Entertainment Daily, Ross revealed he thinks Meghan will go back to her roots now she’s back in Los Angles.

And it’s a move that he claims was always on the cards for Meghan and husband Prince Harry, who he describes “a high-profile couple who want to make money”.

Meghan and Harry recently signed a mega-bucks deal with Netflix to produce content for the channel.

Meghan Markle to return to acting?

But could said content see Meghan Markle return to her acting roots?

Ross King seems to think so.

He told ED!: “That deal with Netflix, no one knows how much it is, but as we all know Netflix writes really, really big cheques.

Read more: Ross King wanted to lick the Queen’s face when she presented his MBE

“I think it’ll be interesting to see what they do produce and what also, at some point, Netflix may want more of.

“I think it’s an obvious thing that at some point they will want some kind of royal documentary and I would imagine they’d want something on Diana,” Ross said.

As much as she’s talked about not acting again, if Netflix came up with an amazing role, maybe a historic figure, it would be a coup for them to get her into acting.

He added: “And then also, with Meghan, as much as she’s talked about not acting again, I think if Netflix came up with an amazing role and it’s an incredible part, maybe a historic figure, it would be a coup for them to get her into acting.”

“I don’t think you can say it will never happen”

Asked if he thinks Meghan will act again, Ross said: “I think all bets are null and void. I don’t think you can say that will never happen.”

Ross also revealed that he thinks Meghan and Harry were involved in the recently released biography Finding Freedom.

“I have read it and I really enjoyed it. But I can’t believe in any way shape or form, they’ve got to have spoken to them a lot. I think they spoke to them,” he said.

“Having read it, there are some things in there where you go” ‘Come on…’

“Right at the end of the book under the credits and thank yous, there’s a little bit that’s kind of like ‘we may have spoken to…’

“It’s an interesting line that almost says… Well, it doesn’t say we didn’t speak to them. I think they did,” he said.

LA move always on the cards

Ross also thinks a move to Los Angeles was always on the cards for the couple.

“I always said that when they went to Canada and everyone was saying that’s it, they’re going to stay there, on Vancouver Island,” he started.

“I went there to cover all of this, it was stunning, it was beautiful, but I was thinking there’s no way in the world, especially if they’re going to go out and make money.

“They’ve got to come here, the entertainment capital of the world,” he said of LA. “A high-profile couple who want to make money, this is the place where people make gagillions.”

“When you saw that announcement and they said North America, I was like, why would you say that? It covers LA obviously. I thought no. I’m not in the least surprised.”

Do you think we’ll see Meghan Markle acting again? Tell us on our Facebook page @EntertainmentDailyFix.