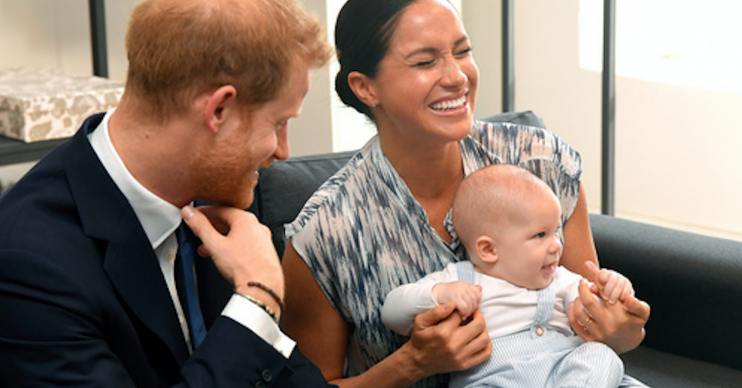 Royal tot is currently back in Canada

The Duchess of Sussex has revealed that baby son Archie has started trying to walk.

Archie, who has just turned ten months old, is currently back in Canada as parents Meghan Markle and Prince Harry finish up their final duties as royals.

But it seems the little one is growing fast – and could soon be on his feet.

According to several newspaper reports, Meghan revealed the progress in Archie’s development during a visit to a school in east London on Friday.

Meghan appeared at Robert Clack Upper School in Dagenham to make a speech ahead of International Women’s Day.

However it was while she was talking with Geraldine Dear – a member of the ‘Dagenham Girls’ who went on strike for equal pay for women at the Ford Motor Plant in 1984 – that Meghan apparently let the news slip.

She was talking about how having Archie has changed her life and how important motherhood is.

“I just had to ask her about the baby,” Geraldine is reported to have recalled.

The 66-year-old is said to have continued: “She said to me: ‘He’s exactly ten months today and he’s started trying to walk.'”

Happy International Women’s Day! Here, a glimpse of The Duchess’ visit to the Robert Clack School to hear from the students on what IWD means to them, and how we can all uplift one another. Tag an inspiring woman in your life and tell us what #IWD2020 means to you. More behind the scenes moments coming soon…

Read more: Prince Harry and Prince Charles are said to be “rock solid” ‘despite Megxit fallout’

Meghan is also reported to have hailed Geraldine for her campaigning role.

The Duchess told her: “Well done on making such an important change for this country. I’m sure it’s not an easy thing to do but it’s the right thing to do.”

Meghan is also reported to have noted to a pupil at the school how becoming a mum has “changed her life”.

Year 13 student Olivia Collins said:  “She was talking about how having Archie has changed her life and how important motherhood is.”

Earlier this week, Meghan gave another update on Archie, saying he is “into everything”.

Attending the Endeavour Awards with her husband on Thursday, she is reported to have made the comment to Claire Spencer, whose husband Lee ‘Frank’ Spencer was nominated for an award.

It was Harry and Meghan’s first joint appearance since announcing their decision to divide their time between the UK and North America in January.

Harry thanked guests for their support during his speech at the event honouring the achievements of wounded, injured and sick servicemen and women who have taken part in sporting challenges over the last year

He said: “Meghan and I are so happy to be back here with you.”

He later added: “A lot of you tonight have told me you have my back, well I’m also here to tell you, I’ve always got yours.”

Last night both Harry and Meghan dazzled in red – him in dress uniform – at the Royal Albert Hall for the Mountbatten Festival of Music.