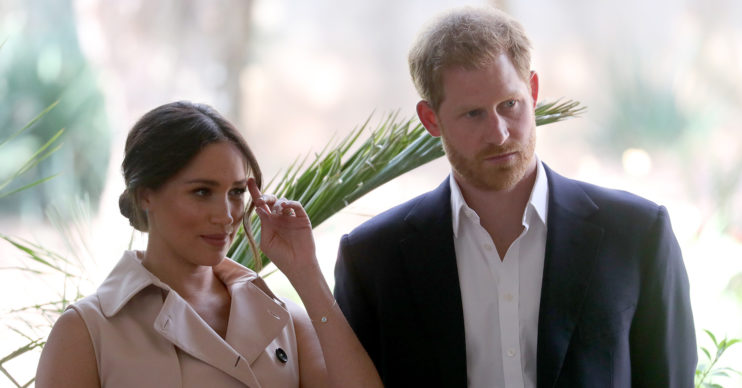 Some were said to have been 'furious'

According to the upcoming publication, Meghan told other royals she was pregnant with son Archie on Eugenie’s big day.

This was apparently much to the chagrin of some members of the Royal family – and Prince Harry was supposedly left particularly red-faced.

Royals At War, written by investigative journalists Dylan Howard and Andy Tillett, claims that Meghan’s announcement was a form of power play.

It describes her pregnancy news as “ensuring her connection with the family was now irrevocable and ceding even more power to her”.

“Meghan put her foot in it”

However, it is rumoured that she announced the baby news during Eugenie’s wedding reception. This occurred three days prior, on October 12.

The book goes on to claim that Meghan’s announcement didn’t go down well at all.

The authors write: “Meghan put her foot in it when she decided that it would be the ideal moment to announce that she and Harry were expecting their first child.

“This was a huge social gaffe, even if you were not a royal – stealing the limelight from Eugenie, who was furious, as was her mother, Sarah.”

The former royal couple have since stepped down from their official duties.

After briefly living in Canada, they now reside in Los Angeles, California.

Keeping a low profile during the coronavirus pandemic, they have been rarely seen in public.

Save a few charity volunteering outings, the family have reportedly been holed up at Tyler Perry’s mansion.

Rumours have circulated that Harry is unhappy with his new American lifestyle.

But an insider has claimed that Meghan is convinced Harry will love LA once lockdown is over.

The insider told the authors of Royals At War: “She’s assuring Harry that once things go back to normal, he’ll love their new life in LA.

A flurry of books about the royals are coming out this year.

Lady Colin Campbell’s Meghan and Harry: The Real Story is currently on sale.

ED! has contacted reps for Meghan Markle for comment.