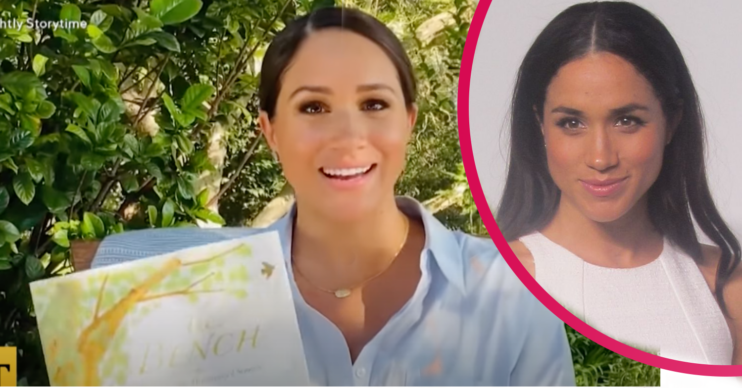 Meghan Markle has paid tribute to Princess Diana during a video to promote her book The Bench.

The Duchess of Sussex made the recording to talk about her children’s book.

She was speaking on Brightly Storytime, a Youtube channel in partnership with Penguin Random House.

The videos are designed to encourage parents to nurture their children’s reading.

The 40-year old wore more than £25,000 worth of jewellery as she read the book, inspired by Prince Harry and Archie.

The collection included a gold Cartier Tank Française watch, worth £17,800.

Princess Diana was given the watch as a gift from her father on her 21st birthday.

Prince Harry was believed to have given it to now wife Meghan in the early days of their relationship.

I plan to give it to my daughter one day.

After his mother’s untimely death in 1997 the watch was passed on to Prince William.

But it is believed Wills gave the watch to his brother in around 2009.

Meghan treated herself to her own version of the Cartier watch in 2015.

“When I found out Suits had been picked up for our third season, which, at the time, felt like such a milestone, I totally splurged and bought the two-tone version.

“I plan to give it to my daughter one day. That’s what makes pieces special, the connection you have to them.”

The watch is not the only jewellery Harry, 37, has gifted to the mother of his two young children.

In 2018, before stepping down as working members of the royal family, the couple toured Australia.

What other jewellery did Meghan wear?

Meghan was filmed reading The Bench in the garden of her’s and Harry’s home in Monticeto in California.

She was also wearing a £5,000 Cartier Love bangle.

What’s The Bench about?

Meghan has spoken before about how the book was inspired by her watching Harry and their son Archie, two.

It tells the story of a father and son’s relationship and the bench acts as ‘an anchor’.

It keeps them grounded and also acts as a place the two can sit together or a dad can sit and watch their child.

The rhyming book becomes a bestseller after Meghan published it in June this year.

The Bench even propelled Meghan Markle to number one of the New York Times’ bestsellers chart.

What do you think of this story? Tell us your thoughts over on our Facebook page @EntertainmentDailyFix