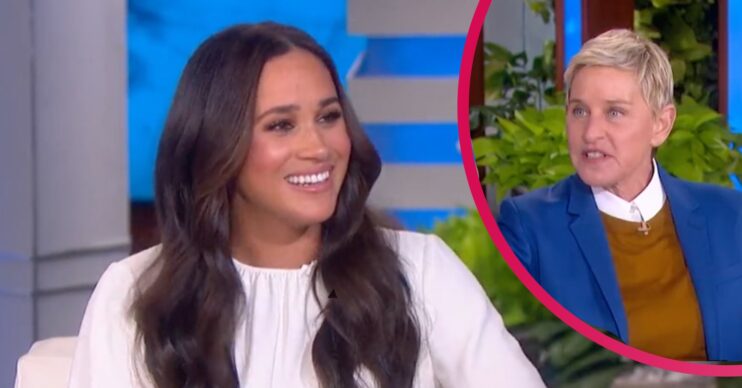 Meghan Markle to make TV return for interview with Ellen

The Duchess of Sussex was glowing during her interview

Meghan Markle is set to make a stunning return to television tomorrow – as a guest on the Ellen show in Hollywood – latest news has revealed.

Ellen DeGeneres posted a clip of Meghan’s upcoming appearance on her Twitter today.

A lot has changed since the last time Meghan, The Duchess of Sussex, was on the Warner Brothers lot. Don’t miss the rest of our interview tomorrow. pic.twitter.com/pBihJLf0um

“A lot has changed since the last time Meghan, The Duchess of Sussex, was on the Warner Brothers lot,” Ellen wrote.

“Don’t miss the rest of our interview tomorrow.”

What do Meghan and Ellen talk about?

In the short clip accompanying the tweet, Meghan receives applause and laughter as she recalls her time as a jobbing actor in Hollywood.

In the preview, Meghan Markle explains to Ellen how she used to always be at the Warner Brothers lot doing auditions.

She says: “What was so nice is the security guards here would always say, ‘Break a leg, we hope you get it!’. So the drive in today was very different!”

Read more: Prince Harry ‘reached out to Princess Diana’s psychic who made prediction about Meghan’

“But you auditioned that often that they [security] knew you to say ‘Break a leg’?” Ellen asks.

“I think they probably said it to everybody, that’s how nice they were!” Meghan Markle replies.

What else did Meghan Markle say?

Meghan Markle then spends the rest of the short clip explaining how the car she used to have was very ‘special’.

“At a certain point, the key stopped working on the driver’s side, so you couldn’t get yourself in through the door,” Meghan explains.

“So after auditions, I would park at the back of the parking lot. And I would open the trunk and climb in, and then pull it shut up behind me, and crawl over my seats to get out.”

Meghan Markle’s story drew laughter and applause from the audience.

“Did anyone ever see you climb through the trunk?’ Ellen asks, but Meghan said no.

“I would play it off!” she laughs.

What was the reaction to her upcoming appearance on the show?

While the audience seemed happy to see Meghan Markle on the show, the reaction on Twitter was far more mixed.

“Ugh,” another said, adding a couple of emojis rolling their eyes to his tweet for good measure.

However, Meghan’s appearance on the show was met with praise from other fans.

“I AM SCREAMIGGGGGGG WE LOVE HER SO MUCH OVER HERE AND YOU CAN SEE IT!!!!!!” one viewer gushed. [Sic]

“Omg she is so cute! Love her and can’t wait to see this!” another commented.

This is Meghan’s first television interview since the hugely controversial interview with Oprah back in March.

During the two-hour special, the Duchess of Sussex explained why she and Prince Harry stepped down as working royals last year.

The interview was met with enormous backlash, particularly in the UK.

What do you make of Meghan’s TV return? Leave us a comment on our Facebook page @EntertainmentDailyFix and let us know what you think.