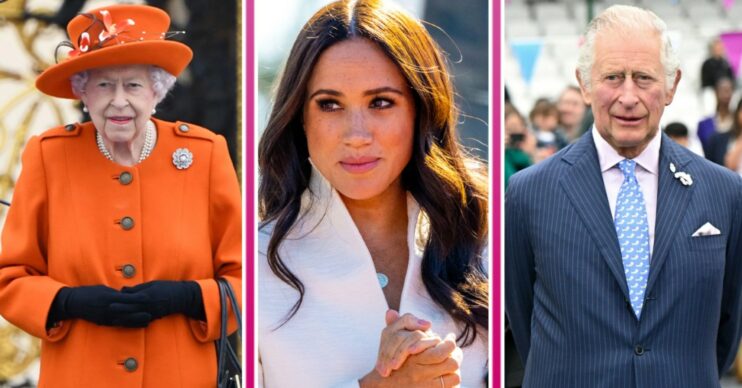 Said to have urged Duchess to visit her father

Meghan Markle’s alleged excuses for not reconciling with her father left the Queen and Prince Charles ‘irritated’, a book has claimed in latest news.

Author Tom Bower claims senior royals held a conference call weeks after the Sussexes wedding in 2018 over the matter.

He alleges both Charles and the monarch urged Meghan – then living in the UK – to fly and see Thomas Markle.

Mr Bower also claims in his new book Revenge: Meghan, Harry and the war between the Windsors that TV appearances by Thomas also rankled royals.

Prince Harry and Meghan stepped away from royal duties in early 2020.

But Mr Bower’s book suggests Charles had had enough of Markle family antics by July 2018.

An extract from the book, published in The Times, Mr Bower writes: “[Charles] had never really understood her or what she wanted.

“That week, his irritation about Thomas Markle’s TV appearances, especially his criticism of the Royal Family, came to a head. ‘Can’t she just go and see him and make this stop?’, Charles is alleged to ‘berated’ his son Harry.

Furthermore, it seems Charles could not fathom Harry’s reasoning for why his wife couldn’t make up with Thomas.

According to Mr Bower, Harry explained Meghan wouldn’t ring him as she allegedly suspected her father’s phone ‘was not in his possession’.

Additionally, the Duchess of Sussex is said to have had concerns about the security of Thomas’ email account.

However, it seems this did not wash with her father-in-law.

The inconsistencies of Meghan’s excuses not only irritated Charles but perhaps also the Queen.

Mr Bower continues: “The inconsistencies of Meghan’s excuses not only irritated Charles but perhaps also the Queen.”

ED! has approached a representative for Buckingham Palace and Meghan Markle for comment.